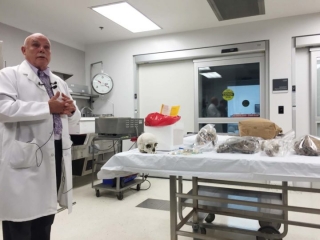 “These statistics closely follow trends reported in 2015,” said Dr. Glenn Wagner, the County’s Chief Medical Examiner.  “The report provides a view of recent death trends in San Diego County based on a subset of the total cases.”

The report offers an overview of cases and examines trends in causes of death for the approximately 8,500 cases the ME’s Office investigates annually – a little less than half of the 19,000 to 21,000 deaths recorded in San Diego County every year. After an initial review, many of those cases are then determined to be sudden unexpected natural deaths.

The data in the report focuses on the 3,070 cases in 2016 that the Medical Examiner’s Office fully investigated. Of those cases, 47 percent were accidental, including deaths related to prescription drug overdoses, motor vehicle trauma, and industrial or agricultural and home-based trauma. Another 33 percent were determined to be natural deaths, 14 percent were suicides, a little more than 4 percent were homicides, and in nearly 2 percent, the cause was undetermined.

Another trend was a general increase over 15 years in unintentional deaths due to drugs and medications, up to 544 in 2016 compared to 268 in 2000. In illicit drug and prescribed medication deaths, methamphetamine remained the single largest cause in 2016 with 240 cases. The number of methamphetamine death cases is also at its highest number in 16 years, increasing steadily since 2000 when there were 62 cases. 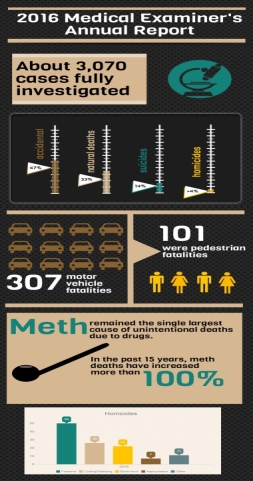 Among the substance-related deaths, alcohol had the second most cases with 106. Heroin overdoses were the third largest cause of deaths with 91 cases, and were most common in the age range 20 to 29. Opiates represented the largest group of medications in the 2016 drug deaths, which included heroin, morphine and benzodiazepines.

In 2016, San Diego also saw four cases involving designer drugs. The drugs included an acetyl fentanyl death, a death from mitragynine (a plant-based opioid commonly referred to as kratom), and two deaths from U-47700, an opioid analgesic not intended for human use.

The data also showed that homicide rates increased compared to the last three years. In 2016, there were 116 homicides, compared to 93 in 2015, 90 in 2014, and 88 in 2013. In 2012, there were 122 cases. Last year, 50 cases were due to firearms, 26 cases were due to cutting/stabbing, 22 were from blunt force, and seven were from asphyxiation. The other 11 were from less common mechanisms such as poisoning, drowning or environmental exposure.

Suicides increased slightly last year with 431 cases compared to 427 cases in 2015. The County urges anyone who is struggling with depression or is concerned about a loved one to seek free mental health and substance abuse counseling. Call the County’s Behavioral Health Access and Crisis Line at (888) 724-7240. Suicide prevention and awareness information is also available at up2sd.org.

As drug-related deaths continue to increase, so have the number of cases handled by the forensic toxicology laboratory. In 2016, the laboratory handled more than 2,100 cases, a hundred more cases than the previous year, and the highest increase in 16 years. In 2001, the laboratory handled fewer than 1,700 cases, but those numbers have steadily increased over the years.

“In general, the findings are valuable to the law enforcement, mental health and drug rehabilitation communities and help guide how we direct resources to County initiatives like Live Well San Diego and the associated task forces on suicides, elder abuse, domestic violence, child fatalities, methamphetamine and prescription drug abuse,” said Wagner. “The death investigation work done by this office is a combination of service, education and research.”

County Medical Examiner investigators are also involved in many research opportunities and are members of various multidisciplinary death review committees, including those that work to reduce trauma deaths and improve the trauma system. Pathologists, investigators and other staff also share their expertise at conferences and in academic settings, including providing a teaching rotation program for pathology residents from UC San Diego School of Medicine and Naval Medical Center Balboa, as well as brief clerkships for medical students from around the country.