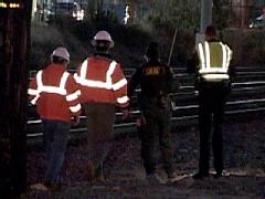 November 5, 2011 (San Diego) – The San Diego Medical Examiner seeks public help to identify a man struck and killed by an Amtrak train on October 28 at 4 a.m. at Pacific Highway and West Washington Street. His fingerprints have been run through national and local databases, but no match has been found.

The victim was white, estimated in his 40s, missing all of his teeth. He had a long beard and mustache, brown hair with blond highlights, and blue eyes. He was 5 feet 10 inches tall and weighed 179 pounds.

The victim was confirmed dead at the scene due to obvious blunt force trauma. San Diego Sheriff's office investigated the tragedy.