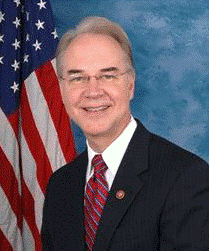 December 5, 2016 (Washington D.C.) – Congressman Tom Price, a Republican from Georgia and medical doctor, is President-Elect Donald Trump’s nominee to served as Health and Human Services Secretary.  But far from protecting the nation’s social safety nets, Price has pledged to dismantle them.

Price has called for deep cuts in Medicare and Medicaid, as well as eliminating the Affordable Care Act, also known as Obamacare.  A bill he introduced last year sought to eliminate Medicaid coverage from 14 million Americans by halting federal funds for Medicaid expansion in most states, also cutting federal subsidies for people on states’ health exchanges.

A former medical director at a hospital orthopedic clinic in Atlanta, Price has been an outspoken critic of the Obama administration’s healthcare law which he says attempts to “commandeer clinical decision making” by doctors such as pushing experimental treatments.

He does have a plan for replacing the Affordable Care Act.   It’s called the Empowering Patients First Act, which would offer age-adjusted tax credits for people to buy their own health insurance policies.  It would also establish incentives to pay into health savings accounts, let insurance companies sell policies across state lines, provide states with grants for limited subsidies to “high risk populations” and let businesses offer coverage through “association health plans.”

But critics say his plan would benefit mainly young, healthy Americans and put older, sicker and poorer Americans at risk--leaving many with no insurance coverage at all.  The plan also relies on consumers voluntarily paying into special accounts to provide care in their old age—ignoring the fact that those with other pressing financial needs or emergencies may be unable to keep up such payments.

Price has said he wants to eliminate Obamacare because although it provided affordable healthcare to tens of millions of poor people who had no coverage before, it also raised premiums for many middle income Americans. He’s also faulted Obama for promising that people could keep their healthcare plan if they wished, though some lost their existing coverage when insurers pulled out of states with exchanges.

Yet a Kaiser Family Foundation shows that despite problems with the Affordable Care Act, 75% of Americans polled said they want to keep the law, not repeal it. Over half said they want the law expanded or kept the same, while just 25% want it repealed.

Among Trump supporters,50% want it repealed.   Yet paradoxically, even most Trump supporters support key provisions of Obamacare, except for mandates forcing everyone to have insurance.

Over 80% of those polled want to keep free preventive care such as cancer screenings. They also want to keep a provision allowing young people to stay on parents’ healthcare plans until age 26.  Moreover, 8 in 10 Americans want to keep federal subsidies to help low and moderate income people buy health insurance—and a strong majority wants to keep insurance marketplaces set up by Obamacare to let people buy insurance through exchanges if they don’t have a healthcare plan through an employer.

But Price’s proposal would repeal the best of Obamacare along with the problematic portions, leaving many people with no coverage at all, or only costly options. Insurance companies would no longer be required to cover maternity care for expectant mothers, or even prescription drug costs.  Coverage for birth control, treatment for drug or alcohol addiction, and certain other medical expenses would also no longer be required, the New York Times reports.

A key provision of Obamacare was prohibiting insurance companies from denying coverage to people with pre-existing conditions.  Price would get rid of that protection, unless you’ve already had continuous insurance coverage for 18 months.  If you had a gap due to illness, job loss, travel or any other reason, you won’t be guaranteed coverage.

Price would also make it harder to sue a doctor for malpractice. In addition, doctors could just opt out of covering Medicare patients and charge people more than is allowed under the Medicare program that currently covers millions of elderly Americans.

Price has also drawn controversy for his votes to restrict abortion, which earned him a 100 percent score in Congress from the National Right to Life Committee and a zero from Planned Parenthood.  He has also been an outspoken opponent of gay rights, leading some gay rights activists to voice concerns about him overseeing healthcare for all Americans.

The American Hospital Association has urged that Obamacare not be repealed without a back-up plan in place.  The American Medical Association initially issued a statement supportive of Price for backing “patient choice” and “reducing excessive regulatory burdens”  but later backed off  its stance after the Clinician Action Network,  wrote an open letter to the association saying Price's policies "threaten to harm our most vulnerable patients and limit their access to care,” U.S. News reports.

New York Senator Chuck Schumer, who will be the minority leader starting in January, concludes, “When it comes to issues like Medicare, the Affordable Care Act and Planned Parenthood, Congressman Price and the average American couldn’t be further apart. Between this nomination of an avowed Medicare opponent to serve as HHS secretary and Republicans here in Washington threatening to privatize Medicare, it’s clear that Republicans are plotting a war on seniors next year.”