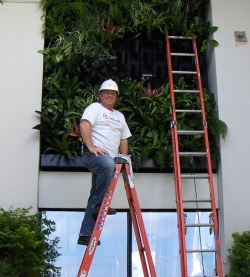 He designed and built his home in 1996 to maximize the site positioning, which provided passive cooling and heating and took advantage of a breeze with cross ventilation and a cooling tower. He used extra insulation, triple- paned low-E windows and a solar water heater to further reduce his power use. He also installed a sophisticated gray water system to irrigate his extensive collection of plants.

Since then, Mumford has been named one of San Diego’s “Eco-Warriors” by San Diego Magazine and serves as an environmental role model. Clients ranging from celebrity Chef Mario Batali to one of California’s most prestigious law firms have called upon Mumford to install cutting-edge “living walls.” Qualcomm wants one! 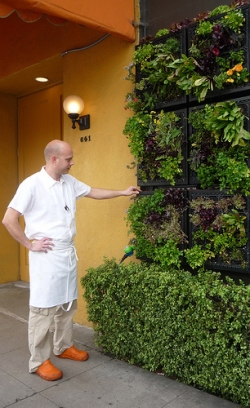 Living walls, also called green walls or edible walls, are structures that allow plant materials to grow on a building but have the added benefit of allowing them to grow on vertical spaces indoors or outdoors. Both types of walls grow in “found space,” using far less space than typical gardens. True to their name, edible walls can be planted with herbs, fruits and vegetables.

Mumford has been growing green walls as part of his living laboratory at GreenScaped Buildings, trying out various methods and products that contribute to low impact development, sustainability and restorative buildings. In addition to the aesthetic benefits of his green roof and walls, they produce increases in biodiversity, cooling buildings and reducing of the urban heat island effect, carbon sequestration, cleaning the air of particulates and adding oxygen.

“I’m now applying my experience with green roofs to the next natural step, green walls and edible walls,” said Mumford. “Green roofs are wonderful but not practical for everyone. Green walls can be built for a fraction of the cost in many more places and are more visible in most cases.”

Mumford says there are many systems with many price points. Many were developed in Southeast Asia where space is at a premium. Each has its positives and negatives. They can work both indoors and outdoors.

“The truth is, anyone can install a green wall that looks great the first day, week or month,” says Mumford. “The trick is keeping it looking good for years. For this reason, a lot of manufacturers won’t sell their products directly to the public, only through certified installers like me.”

The idea of vertical farming and “victory farms” are not new, but with more densely-built urban areas and an eye on lessening environmental impacts, advocates of urban farming have embraced edible walls as a way to lower food costs, increase nutritional quality and cut fuel consumption and carbon emissions by using fewer delivery trucks. While not all vegetables can be grown on a wall (corn being a good example), with practice and technological advancements the possibilities are endless.

The wall at Batali’s Los Angeles restaurant is planted with mint, endive, Chinese celery, rosemary, parsley, chicory, sage, cilantro, beets, lettuce, and edible geraniums. It comprises 72 square feet on an east facing wall near the restaurant entrance. Batali is so pleased with the wall, he recently asked Mumford to double the wall’s size, and to install one at his Las Vegas restaurant Carnevino.

“The victory garden is making a comeback. People keep asking me about growing vegetables on the roof, which is problematic from a labor perspective - you can’t easily allow folks on a roof to tend a vegetable garden.

“We can potentially bring an entire farm to found space in the middle of an urban environment,” said Mumford. “I’m excited to have people with the kind of influence Mario Batali has leading the way and generating awareness of sustainability issues with the project at their wonderful restaurant. And I hope it makes their fantastic pizzas even more delicious! ” Mumford is talking with several San Diego County restaurant owners about installing edible walls at their properties.

Mumford is a frequent lecturer at Cuyamaca College and the California Center for Sustainable Energy.