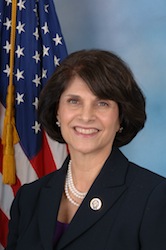 November 27, 2013 (San Diego) – This week, led by Rep. Lucille Roybal-Allard (D-CA) and Rep. Raúl Grijalva (D-AZ), 20 members of Congress wrote to the Acting Commissioner of U.S. Customs and Border Protection (CBP) requesting a meeting to discuss the agency's use of force policies.

Their letter (see below) comes a week after it was reported that CBP has elected not to implement a key recommendation made by the Police Executive Research Forum.  The widely respected law enforcement policy organization had urged the agency to restrict the use of deadly force in situations involving rock throwers and people in vehicles.  CBP also continues to resist full public disclosure of its use of force policies despite a series of deaths and widespread allegations of abuse involving CBP personnel.

"Although CBP is making progress," said Rep. Roybal-Allard, "I remain deeply concerned about the lack of transparency which continues to hamper our efforts to hold the agency accountable.  I also strongly believe CBP should move swiftly to implement the best practices of law enforcement, including the recommendations of the Police Executive Research Forum, to prevent incidents of abuse and deaths involving agency personnel."

"The Border Patrol has not been as forthcoming as possible about how it uses force in the name of public safety, and that needs to change," Rep. Grijalva said. "If the American people don't believe the Border Patrol will answer honest questions about its conduct, the mission will suffer. It's time for some accountability and transparency. I agree with the people of the border region and the entire country that that's not too much to ask."

Since 2010, at least 19 people have died in incidents involving certain CBP officers.  Among those killed were minors, U.S. citizens and individuals who were on the Mexican side of the border when CBP personnel opened fire.

Last month, the DHS Office of Inspector General (DHS OIG) released a report entitled, "U.S. Customs and Border Protection Use of Force Training and Actions to Address Use of Force Incidents."  This investigation criticized CBP's deficient system for recording events involving the use-of-force by CBP personnel and noted that more than 1,000 allegations of excessive force by the agency were filed from 2007 to 2012.

Under your leadership, U.S. Customs and Border Protection (CBP) has taken significant steps to respond to a series of incidents that called into question the adequacy of CBP's use of force policies.  CBP commissioned both internal and external policy reviews, and you recently announced a series of policy changes in response to the findings of these inquiries.  We welcome these developments and commend your commitment to addressing the factors that may have contributed to cases of abuse and deaths involving CBP personnel.  We write to request a meeting with you to discuss in greater detail CBP's plans for improving its use of force policies and practices, including oversight and accountability mechanisms.

Since January 2010, at least 19 individuals have died as a result of encounters with CBP officers and agents.  Among those killed were minors, U.S. citizens and individuals who were on the Mexican side of the border when CBP personnel opened fire.  Prompted by these incidents, in May 2012, members of Congress requested an analysis of CBP's use of force policies by the Department of Homeland Security Office of Inspector General (DHS OIG).  The resulting inquiry found that fully 1,187 complaints of excessive use of force were reported to CBP between 2007 and 2012.  The DHS OIG also determined that your agency lacks an adequate system for tracking use of force incidents across and within its various complaint mechanisms.  The absence of a streamlined, integrated complaint process represents a serious barrier to building a culture of accountability within the agency.

As you know, CBP also conducted its own internal review of its use of force policies and commissioned an independent inquiry by the Police Executive Research Forum (PERF).  Together, we understand the three investigations produced at least 90 separate recommendations.  You have rightly taken this input seriously, announcing a series of important policy changes.  On September 25th, CBP committed to implementing new training and tactics, acquiring better equipment for its personnel, and establishing improved systems for auditing use of force incidents, among other measures.

Unfortunately, the two-page outline of forthcoming policy changes issued by CBP in September was not comprehensive and did not include a firm timeline for implementation.  In addition, we are concerned by reports that CBP may not be aggressively implementing key PERF recommendations, including restrictions on the use of lethal force in certain situations, which would better align agency policies with the best practices of comparable law enforcement entities.  Further, we remain troubled that, to date, CBP has yet to make public the results of any investigation of deaths involving allegations of excessive use of force by CBP personnel.

For these reasons, we look forward to a detailed discussion of your plans to improve CBP's complaint, investigation, and disciplinary processes.  We are also interested in learning more about your plans for implementing the recommendations of the three reviews of CBP's use of force policies-particularly given the size of your workforce and the resource constraints you face-and how you intend to measure the success of any policy changes made in response to these reports.  Further, we strongly encourage you to consult with the Civil Rights Division of the Department of Justice on the development and implementation of any new policies and training programs.  Finally, we look forward to discussing the ways in which your agency intends to use information gathered from complaints to improve the training and supervision of officers.

To better inform our understanding of CBP's current policies, we also request copies of the CBP use of force policy handbook; the CBP internal study on use of force; the CBP Internal Affairs guidance regarding the processing and investigation of use of force complaints; and the PERF review of your agency's use of force policies and practices.

Thank you for your attention to our request for a prompt meeting and for your commitment to improving the effectiveness, transparency and integrity of your agency.  We look forward to continuing to work with you to ensure that CBP's performance matches the high expectations of the American people.

grijalva is a racist and could care less about the safety and security of the officers and the USA.  he is an open border advocate who is doing his best to amass political power based on ethnicicty.

those who are teaming with him are showing their support for criminal behavior and their dislike of the Constitution and the law.