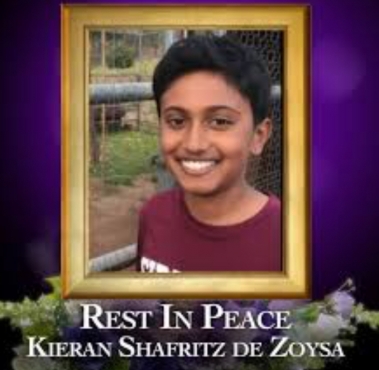 Update: View 10 News coverage of the celebration of life for Kieran:

August 4, 2019 (Lakeside) – A memorial service for friends and family of Kieran Shafritz de Zoysa will be held on Wednesday, August 7 at 6 p.m. at Oakoasis Park in Lakeside, where a bench will be dedicated as Kieran’s View. The 11-year-old boy who dreamed of being a neurologist in hopes of finding a cure for Alzheimer’s was killed during the Easter Sunday terrorist bombing on April 21 in Sri Lanka.

His father, Alexander K. Arrow, had gone kayaking with Kieran at San Vicente reservoir in Lakeside just days before Kieran lost his life.  “It’s a good opportunity to have that deep father-son discussion when the two of you are out in kayaks,”  Arrow told the Washington Post, as he recalled poignant memories shared with his son.

“He was totally altruistic. He did everything he did because he wanted to help people,” Arrow, a medical doctor, said. “And that’s who the terrorists took away from us.”

Born in New York City, Kieran lived in Menlo Park, California in his first year of life and later alternated time between his father’s California home and the home of his mother, Dhulsini de Zoysa, in Washington, D.C.  He was attending the Elizabeth Moir International School in Colombo, Sri Lanka on leave from the Sidwell Friends School in Washington D.C., where as a sixth grader he was recognized as a Form 1 Prefect for his academic excellence, good conduct and leadership role.

Though only 11 years old, his achievements were substantial. He won a bronze medal in the prestigious Royal Commonwealth Prize in poetry in 2018, excelled in math, science and English, and loved traveling to foreign countries with his mother.  He also completed the Johns Hopkins Center for Talented Youth Physics of Engineering course in La Jolla in 2018. He was also learning to speak Mandarin Chinese.

His father wants everyone to remember his son’s goodness at heart – a heart that was pierced by shrapnel when the explosion tore through a restaurant where he was dining with his mother and grandmother, who survived the attack that ended Kieran’s hopes and dreams for the future. The bombing, one of several in Colombo on the same date, killed 319 people and injured over 500.

In addition to his parents, he is survived by his grandparents, K. AlagaRanee de Zoysa of Colombo, Sri Lanka, and Jay M. Shafritzz of Las Vegas, Nevada, as well as an aunt, uncle, and four cousins.

An earlier memorial service honoring Kieran was held at the National Cathedral in Washington D.C.