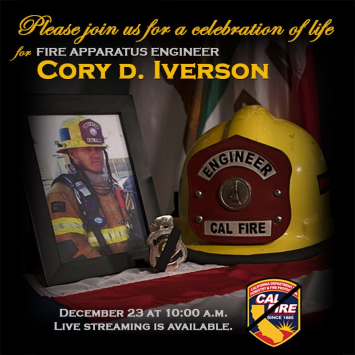 December 23, 2017 (San Diego) — Governor Jerry Brown is expected to attend a memorial service Saturday at 10 a.m. at the Rock Church in  Point Loma to honor Cory D. Iverson, a Cal Fire engineer station in Dulzura who lost his life battling the Thomas Fire in Ventura County.  The service is private, but will be live-streamed for the public to view at www.SDRock.com/Iverson.

"His bravery and years of committed service to the people of California will never be forgotten," said Governor Brown, who ordered flags at the state capitol flown at half mast.

"This incident has shaken our organization to the core," Cal Fire San Diego Chief Tony Mecham said. "It has affected us statewide, but no more than here in San Diego County."

Firefighters countywide held a boot drive Friday to raise funds for Iverson’s family.  Iverson is survived by his wife, Ashley, and their 2-year-old daughter, Evie. Ashley is pregnant with the couple's second daughter, who is due in the spring.

Iverson was assigned to the Thomas Fire as part of a five fire-engine strike team from Cal Fire San Diego.

A procession to bring his body home last weekend drew tens of thousands of firefighters and members of the public. Every overpass from Ventura to San Diego was lined by firefighters and others saluting the fallen hero.