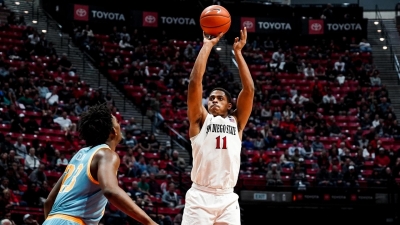 November 22, 2019 (San Diego) -  San Diego State let the Long Island Sharks hang around into the second half before putting them away with an impressive closing burst that kept the Aztecs undefeated.

Matt Mitchell scored 12 of his 18 points in the second half and had a hand in two sweet plays as San Diego State won 81-64 Friday night.

Jordan Schakel scored 15 and had three big 3-pointers in the second half for SDSU (5-0), while Yanni Wetzell and Malachi Flynn scored 13 apiece. Flynn had 10 assists.
The Aztecs outscored LIU 18-10 in the final six minutes, with Mitchell, Flynn and Schakel leading the way.
"We just came out in the first half with low energy. We weren't fully bought into the game," Mitchell said. "Coach (Brian Dutcher) came in at halftime and he got into us and told us we had to pick it up, pick up our energy, have to rebound better, have to play better on the defensive end. I think we did a better job going out in the second half and playing hard on both sides of the floor."
SDSU's closing run started when Mitchell stole the ball and passed to Flynn, who found Wetzell for a reverse layup for a 65-54 lead.
Mitchell hit three shots down the stretch, Flynn had consecutive 3-pointers and Schakel hit the last of his three 3-pointers in the half and fourth overall.
"I think that my teammates did a great job of finding me in open spots, moving the ball as a team," Mitchell said. "I just happened to be the guy in the right spot tonight, so credit to my teammates."
Said Dutcher: "Our assists were ridiculous. Usually you would say it was a beautiful offensive performance when you get 26 assists on 32 baskets. That's amazing. So we did move the ball, but we missed a lot of shots too. We made enough to come away with the victory."
Earlier in the second half, Flynn flashed through the key, took a pass from Mitchell on the baseline and dished to Wetzell for a slam dunk and a 54-44 lead.
"Obviously in the first half we didn't make shots and that was the main thing," Wetzell said. "At halftime Coach Dutch said, 'It's OK, we're going to make shots eventually.' He was more frustrated about the defensive end. We came out and started focusing more on the defensive end and we knew shots were going to fall and that's what happened."
Dutcher said the Aztecs "played hard; we just didn't have the game plan the right way to be successful. We had to flip it and play things the way we had earlier in the year. It was an adjustment we made and thank goodness we made it. I think it made their offense a lot more stagnant in the second half."
It was the second game in double digits for Wetzell, a senior transfer from Vanderbilt. The big New Zealander was coming off career-highs of 20 points and 12 rebounds in a 66-49 win against San Diego on Wednesday night.
"To me they're an NCAA Tournament team obviously that can advance," LIU coach Derek Kellogg said. "I thought our guys played really hard, especially in the first half we were really competitive. I thought it was a good game for our guys as a measuring stick to see where we are against what I see as one of the top 35, 40 teams in the country.
"I thought their depth wore us down some," he added. "We're a little underhanded as far as size goes. They've got a nice group of nine, 10 guys that keep coming at you and then they made some shots. With 3-point shots, if you can knock down a couple of those against our zone, I thought it opened up some."
Dutcher said it "was a challenge today obviously" facing LIU's zone. "This is the first zone that we've seen all year and we saw 40 minutes of it. We did some good things against it."
The Aztecs got three straight 3-point shots during an 11-0 run in the first half that gave them control. KJ Feagin, Schakel and Mitchell each connected from behind the arc and Aguek Arop then hit a long jumper for a 17-7 lead. SDSU's biggest lead was 28-15 after Joel Mensah hit a jumper with 8:53 before halftime.
SDSU led 38-32 at halftime.
Jashaun Agosto and Raiquan Clark each scored 10 points for LIU of the Northeast Conference.
BIG PICTURE
San Diego State: The Aztecs are 5-0 for the first time since 2014-15, when they went to the NCAA Tournament. They've played in the postseason only twice since then, in the NIT in 2016 and the NCAAs in 2018.
UP NEXT
San Diego State hosts Tennessee State on Monday night.
Box
Postgame notes
Postgame quotes