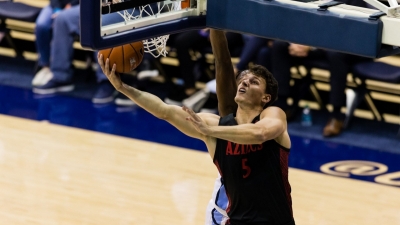 It was Wetzell's first double-double at SDSU and his third in Division I. He had two double-doubles last year at Vanderbilt.

San Diego State, which improved to 4-0 for the first time since the 2014-15 season, avenged last year's 12-point home loss to the Toreros (2-4).
Wetzell's previous career-highs were 16 points against UNC Asheville on Dec. 31 and 11 rebounds against Arkansas on March 6.
The 6-foot-10 Wetzell made 9 of 11 shots as he scored from inside and outside. He showed a nice touch with everything from a hook shot, a jump hook and a 3-pointer. He made two of the Aztecs' final three shots of the first half and had 13 points in the first 20 minutes to help the Aztecs to a 34-26 lead. He then opened the second half with a hook shot and a 3-pointer to extend the lead to 13 points.
Wetzell is one of three new players in SDSU's starting lineup.
Malachi Flynn and Nathan Mensah had 10 apiece for SDSU.
BIG PICTURE
San Diego State: This was the final game of the current contract between the teams and SDSU is considering not renewing it, at least immediately, because they feel they have nothing to gain and everything to lose. Plus, the Mountain West is considering going to a 20-game conference schedule and the Aztecs would prefer to use this slot for a higher-profile opponent.
UP NEXT
San Diego State hosts Long Island on Friday night at 7 p.m.
Box
Postgame notes