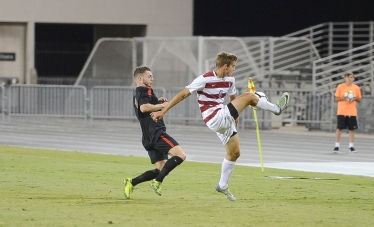 September 28, 2017 (San Diego) - SDSU men’s soccer has had a tough going in the early season, but they are a .500 team at 4-4.  They opened conference play tonight at home on the SDSU Sports Deck against defending national champion Stanford.

A missed opportunity in the 15th minute killed the Aztecs.  A header off of a free kick missed the goal by inches and three minutes later when Aztecs redshirt senior goalkeeper Adam Allmaras came out of the net to seize the ball, Stanford senior forward Corey Baird put it right past him to give the Cardinal a 1-0 lead in the 18th minute and took it to halftime. 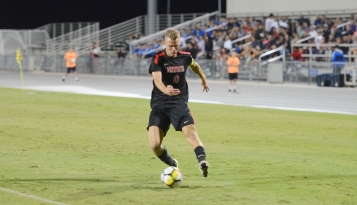 Another missed opportunity hurt the Aztecs in the second half.  When redshirt senior Stanford keeper Nico Carti came out of net and SDSU couldn’t capitalize, senior forward Foster Langsdorf scored at the other end and the Cardinal led 2-0 in the 60th minute.  Stanford was too quick and too fancy for the Aztecs and it showed in the 65th minute when Langsdorf worked some fancy footwork and rolled it in for a 3-0 Cardinal lead.  Another fantastic lob by Amir Bashti gave Stanford a 4-0 lead in the 74th minute.  Bashti added one more in the 87th minute to seal the 5-0 win.  SDSU falls to 4-5.

SDSU takes on Cal at noon on Sunday at SDSU Sports Deck.