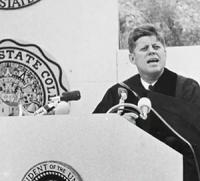 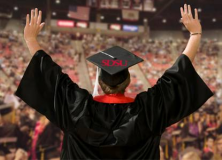 May 11, 2013(San Diego) — In 1963, President John F. Kennedy gave the commencement speech at San Diego State University and was awarded SDSU’s first honorary doctorate degree. Fifty years later, as SDSU prepares to confer degrees upon nearly 9,100 students May 16-19, his words on the importance of higher education for our nation’s future are still just as meaningful.

“A lot of what JFK said at that time continues to be relevant, including his recognizing California and San Diego State as premier sites of higher education,” said Rob O'Keefe, president of SDSU Associated Students. “Fast-forward to today, we see how things have progressed, how in just the past year things have been truly transformational for this campus.”

Half a century ago, Kennedy told SDSU graduates, "As a nation, we have no deeper concern, no older commitment and no higher interest than a strong, sound and free system of education for all...In fulfilling this obligation to ourselves and our children, we provide for the future of our nation—and for the future of freedom." He reflected on the educated founders of our nation, the importance of an educated populace for the future, and the disparities in educaitonal opportunities across the nation.   View video of Kennedy's 1963 SDSU commencement address.

As the Class of 2013 embarks on life’s next venture, so too does SDSU with the implementation of its new strategic plan, “Building on Excellence.” In the fall of 2012, SDSU initiated a university-wide strategic planning process focusing on student success, research and creative endeavors as well as community and communication.

O'Keefe, who was a part of the strategic planning committee, said he is thrilled to have been a part of a pivotal time in the university’s history. “The stereotypes of SDSU are breaking down and we are quickly becoming a force to be reckoned with. The direction of the strategic plan is a testament to the people that work here, the administration, faculty, staff and students.”

The 2013 graduates are set to make their mark on the world too. They include students such as Genaro Hernandez Nunez, a molecular biology master’s student, who after being admitted into seven elite universities including Harvard, Stanford and Johns Hopkins, decided to attend the University of Texas Southwestern Medical Center in the fall. He will conduct research alongside Nobel Prize winners in the field of metabolics to prevent cardiovascular disease and diabetes.

Jessica Antonel, a 2013 degree candidate in the Graduate School of Public Health was one of 11 SDSU students who received a Fulbright grant for 2013-2014. She will use techniques developed during her Peace Corps experience in Cameroon to conduct air quality assessments in the tiny African country of Benin.

“We are extraordinarily proud of this year’s graduates and I offer my heartiest congratulations to them and their friends and family,” Hirshman said. “We wish them well as they continue the 116 year tradition of leadership established by our many distinguished alumni.”

SDSU will award honorary doctorate degrees to two distinguished San Diegans – The Honorable Jerry Sanders, former San Diego mayor and CEO of the San Diego Regional Chamber of Commerce, and Linda Lang, chairman of the board and chief executive officer of Jack in the Box Inc. Sanders and Lang will be honored during commencement ceremonies on May 17 and 18 at Viejas Arena.

Since Kennedy was awarded with the university’s first honorary degree in 1963, SDSU has conferred a total of 36 honorary doctorates to local, national and international figures.

During the ceremonies, May 16 to 19, President Hirshman and Provost Nancy Marlin will confer the degrees on the students.

Of those graduating, 6,794 will earn bachelor’s degrees from one of SDSU’s eight colleges.

The most intimate ceremony is the College of Engineering, taking place at 9 a.m. on Sunday May, 19. With 541 degree candidates – 419 of those will earn bachelor’s degrees, 120 master’s degrees, and two will receive doctorates.

San Diego State University is the oldest and largest higher education institution in the San Diego region. Since it was founded in 1897, the university has grown to offer bachelor's degrees in 89 areas, master's degrees in 78 areas and doctorates in 21 areas (Ph.D., Ed.D., Au.D., and DPT).