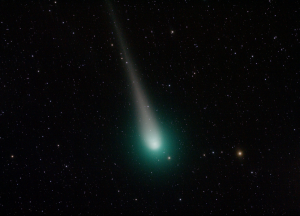 If you missed it, watch for the Leoinids meteor shower due up next,  on November 16.

Meteor showers are caused by earth entering a zone where a comet (such as the image at left, photographed by Jim Morrison, San Diego Astronomy Association) passed through the earth-s orbit in the past. As the sun heats a comet up, it leaves a trail of dust and rocky debris ejected off.

“Sounds like we are seeing an increase in activity due to this shower on the 16th,” Jerry  Hilburn with the San Diego Astronomy Association told ECM.  The SDAA has an observatory in Boulevard.  You can view images of comets and other celestial bodies at the SDAA website:  http://aisig.sdaa.org .

The Leoinids meteor shower is next up on November 16th.  More than 100 tons of debris enter the atmosphere each day of the shower, with activity increasing for a week to 12 days prior to the predicted shower.   The Leoinds were created by the comet Temple-Tuttle first discovered in 902 AD.