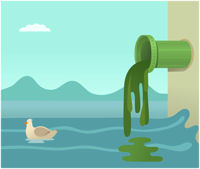 Existing Water Contact Closure for Border Field Park and Tijuana Sloughs to Remain
April 25, 2012 (Tijuana, Mexico) -- An estimated 2 million gallon sewage spill occurred yesterday in Mexico. The spill, which was caused by a broken sewer line in Rio Alamar drainage, started 12:00 PM and ended at 12:00 AM midnight yesterday. None of the sewage was recovered so all of it flowed into the Tijuana River.
The beaches that would have be affected by the sewage spill are currently closed and will remain closed as the Department of Environmental Health had already issued a water contact closure for the ocean shoreline at the Tijuana Slough National Wildlife Refuge and Border Field Park (the beach line from U.S. Mexico Border to the South End of Seacoast Drive) as a result of sewage-contaminated flows from the Tijuana River that have been entering the United States since March 17.

As a result of this new sewage spill these beaches will remain closed and signs will remain in place until sample results indicate the ocean water is safe for recreational use.

For more information on the Tijuana River, please call the U.S. International Boundary & Water Commission at 619-662-7600.