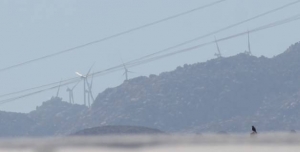 October 28, 2014 (Ocotillo) – Residents in the southern portion of San Diego and Imperial Counties have voiced surprise at seeing massive wind turbines sprouting up just south of the border.  The La Rumerosa wind facility in Mexico is visible across our region – causing consternation in some quarters.

In Ocotillo, resident Jim Pelley already contends with flashing red lights from the Ocotillo Wind Energy Facility on three sides of his home, which continue to flash on and off into his windows at night despite numerous complaints from residents. Once the Mexican facility is fully powered up, he will have the problem on the fourth side as well.  He sent this photo of his new view, writing, “Another set of blinking lights from a project that is in Mexico seen from our kitchen window, is there no end to this madness… More photos attached

I guess I’m going to have to close all curtains at night, unbelievable.”

The lights are designed to prevent aircraft from striking the towering 500-foot-tall turbines at night, but at significant cost to neighbors of the projects.