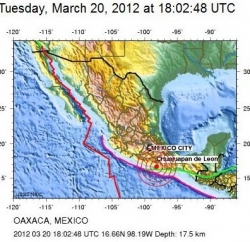 According to the Mexican Red Cross they responded to a few panic attacks, but there were only two minor injuries in the city. Buildings performed and civil defense is still checking buildings.  About 1,200 were reported with cracks, as of this morning, per Notimex, but all buildings so far checked had only cosmetic damage. They have not found any structural damage.

Close to the epicenter, in Ometepec County in the southern State of Guerrero, 800 houses are considered a complete loss; within 24 hours the army moved in in support enacting the civilian civil defense plan, DNIII-E.  They did overflights of the zone within an hour of the quake to triage needs and had a clear road to bring in supplies. The Governor reports 30,000 homes in the state damaged but recoverable.

The mayor of Cuajinicuilapa reports two dead, possibly related to the quake. One died after a wall fell on him, the second from a possible heart attack.

The health care system saw the evacuation of two hospitals in the capital and the regional hospital at Ometepec. Moreover, the total number of casualties was 11 injured with one serious casualty in the state of Oaxaca; the patient  was transported to Acapulco.

Aftershocks continue and more casualties are possible.  Also troubling, the  National University is looking at  possible volcanic activity from an ancient volcano, unlike the Paricutín in 1947 that actually rose from the ground. They have installed sensors around the site at Pinotepa Nacional in Oaxaca.

The success story here is that Mexico’s building regulations, which became quite stringent after the 1985 quake, along with a muscular civil defense system, saved lives.  Moreover, the Mexican Civil Defense system has matured to the point that the southern State of Chiapas held quake exercise at the same time the earthquake happened. These exercises are held regularly across the country.  To say that this coincidence became a source of jokes in social media is to put it mildly.

On a personal note, when I first called my mother in Mexico and got a "call cannot be completed in the country you are trying to call," my mind went back to 1985. Back then the communications trunk went down and we didn't hear a thing for three days.

This time, It was a relief to hear the CEO of Telmex on Radio Formula, out of Tijuana say that the system was overloaded. This is what they call the "earthquake effect," and demand went to about 110%. The same exact thing happens here when we have a major event.

On the other hand, Facebook and twitter were never affected. This is how many residents let their relatives know they were okay.