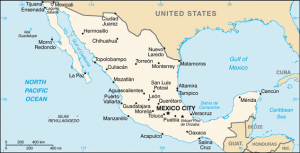 For the first time, the warning now includes major cities and travel destinations in Baja California including Tijuana, Rosarito, Ensenada and Mexicali.  Major concerns include criminal activity along highways, especially at night.  Turf battles between criminal groups have resulted in numerous homicides, including shootings of innocent bystanders, even during daylight hours.

Travelers are also advised to exercise caution in Baja California Sur in the state capital of La Paz, as well as Cabo San Lucas, major travel destinations that have experienced high rates of violence including homicides.

While millions of American citizens safely visit Mexico each year and there is no evidence that Americans have been specifically targeted, U.S. citizens have fallen victim to criminal activity, including homicide, gun battles, kidnapping, carjacking, and highway robbery.

Gun battles between rival criminal organizations or with Mexican authorities have taken place in towns and cities in many parts of Mexico.  Gun battles have occurred in broad daylight on streets and in other public venues, such as restaurants and clubs.  During some of these incidents, U.S. citizens have been trapped and temporarily prevented from leaving the area. Criminal organizations have used stolen vehicles to create roadblocks on major thoroughfares, preventing the military and police from responding to criminal activity.

According to statistics published by the Mexican Secretaria de Gobernacion (SEGOB), in 2013 kidnappings nationwide increased 20 percent over the previous year.  The states with the highest numbers of kidnappings were Tamaulipas, Guerrero, Michoacán, Estado de Mexico, and Morelos.  Additionally, according to a study by National Institute of Statistics and Geography, Mexico suffered an estimated 105,682 kidnappings in 2012, but only 1,317 were reported to the police.  Police have been implicated in some of these incidents.  Both local and expatriate communities have been victimized.  U.S. citizens are encouraged to lower their personal profiles and to avoid displaying indicators of wealth such as expensive or expensive-looking jewelry, watches, or cameras.  U.S. citizens are encouraged to maintain awareness of their surroundings and avoid situations in which they may be isolated or stand out as potential victims.

Kidnappings in Mexico have included traditional, "express," and "virtual" kidnappings. Victims of traditional kidnappings are physically abducted and held captive until a ransom is paid for release.  "Express" kidnappings are those in which a victim is abducted for a short time and forced to withdraw money, usually from an ATM, then released.  A "virtual" kidnapping is an extortion-by-deception scheme wherein a victim is contacted by phone and convinced to isolate themselves from family and friends until a ransom is paid.  The victim's family is then contacted and a ransom for the "kidnapped" extracted.  Recently, some travelers to Mexico staying at hotels as guests have been targets of such "virtual" kidnapping schemes.

Of particular safety concern are casinos or other gambling establishments and adult entertainment establishments, the State Department reports.  Carjacking and highway robbery are serious problems in many parts of the border region, and U.S. citizens have been murdered in such incidents—though most victims who complied with carjackers' demands were not physically harmed.  Carjackers have shot at vehicles that have attempted to flee.  Incidents have occurred during the day and at night, and carjackers have used a variety of techniques, including roadblocks, bumping/moving vehicles to force them to stop, and running vehicles off the road at high speeds.  There are indications that criminals target newer and larger vehicles, especially dark-colored SUVs.  However, even drivers of old sedans and buses coming from the United States have been targeted.  Violent carjackings usually occur at night and on isolated roads, so traveling between cities only during daylight outs and avoiding isolated roads can reduce your risk.

The Mexican government has deployed federal police and military personnel throughout the country as part of its efforts to combat organized criminal groups.  U.S. citizens traveling on Mexican roads and highways by car or bus may encounter government checkpoints, staffed by military or law enforcement personnel.  In some places, criminal organizations have erected their own unauthorized checkpoints, at times wearing police and military uniforms, and have killed or abducted motorists who have failed to stop at them.  So you should cooperate at all checkpoints, the State Department advises

Demonstrations are common but can turn confrontational and escalate into violence.  Protesters in Mexico may block traffic on roads or take control of toll booths on highways. U.S. citizens are urged to avoid areas of demonstrations.   Travelers who encounter protestors demanding unofficial tolls are generally allowed to pass upon payment. U.S. Citizens should avoid participating in demonstrations and other activities that might be deemed political because the Mexican Constitution prohibits political activities by foreigners, so such actions may result in imprisonment or deportation.

The Department since 2010 has imposed restrictions on U.S. government employees' travel in Mexico, including banning night driving in some areas, which means U.S. government personnel will not be able to respond quickly to help Americans in an emergency situation.

For emergencies involving U.S. citizens in Mexico, contact the U.S. Embassy or U.S. Consulate.  For information on the ten U.S. consular districts in Mexico and links to their websites, please consult the Mexico U.S. Consular District map on the State Department’s website for travelers at www.travel.state.gov.

and it extends to the whole country. The list of places where no advisory is given is really, really, really short. Hey, at least San Miguel de Allende is not in it, and it is truly a place that is worthy of a visit, same goes for Puebla and Queretaro. But hey, the crisis just continues to deepen. And this is one reason when we travel we do not carry expensive DSLRs and leave the cell phones at my mom's home. The point and shoot works, it is a few years old and we do not stand out like sore thumbs. In fact, that point and shoot is now becoming our default travel camera.
How do you get to them from the U.S. without driving through areas that are on the warning list as dangerous? As for us, we'll be looking elsewhere for a cheapie vacation this year...Check out groupon travel deals, our daughter did one to Costa Rica, amazing.
to most of these areas. You can travel to Monterrey by air, you can travel to Cabo, hell, I would recommend Guanajuato, which is not in this list and there is air travel from Mexico City to Leon, and then a short road trip, or from Guadalajara, I think TJ you can also do that. And that whole state is not in the warning list, and Guanajuato, the birth place of Mexican Independence (well technically Dolores, a short hour from there), is a beautiful colonial town. There is a whole colony of expats in San Miguel Allende, an artist colony, also within driving distance, another amazing little jewel. As to Acapulco, once it had it's charm, these days not so much, and it is separate from the cartels. The place was over hyper developed. And I will be honest, that Federal road is quite safe during the day, and that includes the few times that the toll booths are taken for a donation. Most people know LEAVE THE TOURIST ALONE. Quintana Roo, again free of warnings, has air traffic to it, and the Maya ruins are spectacular. This goes for Merida too. Though these two, avoid them during hurricane season... Puebla, outside any warning, also has air travel, as well as Queretaro. Both are not just center of industry but amazing colonial cities. Now if el Popo goes (nature) and wind is in the right direction, well that be ash from a volcano. Of course, this is right now. I expect things to get more ahem, interesting, and not just in Mexico. Here in the States things are getting more and more interesting. I just hope we do not have any breaking anything in the next ten days.
For those who want to travel to Mexico and need some practical advice on the safest options.
and connect a flight. Hubs are mostly Guadalajara and Mexico City, though Puebla is starting to serve as one too,
I actually lived in Tijuana, Mexico, for 5 years on two separate occasions, once with my 13-year-old daughter from Chicago. I would catch a bus to the border every day, and cross it and take the trolley to get her to Junior High in San Diego. It was quite an enriching experience for me and her. My brother would come and live with me from Milwaukee, and we basically considered Baja California our second home. I started writing for the Baja Times in Rosarito Beach, Mexico, and it would lead to my now illustrious career with the East County Magazine. I had some great times in Mexico, and still have friends there. I even wrote an article for the Baja Times; "Accentuate the Positive" for there are many positive things about Mexico.
I was a Baja traveler and enjoyed the Pine forests that resemble Cuyamaca, the Pacific coast beaches, and the beauty of the Sea of Cortez from San Felipe to Puertecitos. A friend had two trailers at Campo La Roca and a neighbor built a large concrete covered patio. You had to pay "La Mordita" to bring construction materials into Mexico. A friend would hide plywood and 2X4's in his vehicle when going south. There was great food and none of the tourist shops or attractions common in border towns. Fresh caught shrimp, the largest I've seen and Cabrilla just off the boat. The night sky was fantastic.