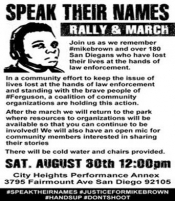 August 29, 2014 (San Diego) - Activist San Diego (ASD), a coalition of community organizations, in an effort to keep the issue of lives lost at the hands of law enforcement, will have a rally at the City Heights Performance Annex in San Diego. As will many other such rallies throughout the country, the rally will be in remembrance of Mike Brown and the town of Ferguson, Missouri.

Community activists will rally and march to remember Mike Brown and over 180 San Diegans who have lost their lives at the hands of law enforcement.

In a community effort to keep the issue of lives lost at the hands of law enforcement and standing with the brave people of Ferguson, a coalition of community organizations are holding this action.

After the march the community activists will return to the park where resources to organizations will be available so that they can continue to be involved. They will also have an open mic for community members interested in sharing their stories.

They will have cold water for folks who attend and chairs for those who need it.