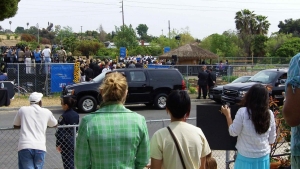 By Chris Morrow, freelance journalist/CNN iReporter
April 14, 2010 (City Heights) --Residents of City Heights who spend hours daily tending the garden Michelle Obama visited today wished they had been part of the moment.
Hundreds of guests attended to meet the First Lady as she toured the New Roots Community Farm, but only three of the community growers were invited as she walked through their garden.

Many of the growers watched in their homes across the street. It was a time of happiness to have the First Lady visit the farm and also a time of sadness to not be included. 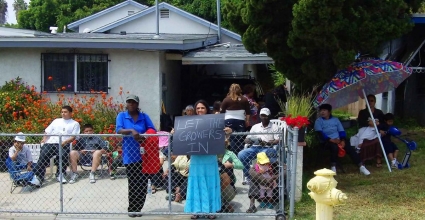 One resident, Eliza Steeple, held up a sign that implored, "Let the growers in."

I was in the home of Helen Jennings across the street from the event with Michelle Obama. We were in lock down for four hours - no one could go in or out of their homes. This action to not invite the farmers gave a mixed message to the children of the community.

Michelle Obama visited the New Roots Community Farm in Chollas Creek in support of her Let's Move campaign to reduce childhood obesity within a generation. In her speech, she praised the people who had organized the thriving farm, including immigrants and refugee farmers.  "They're doing a fabulous job," said the first lady.