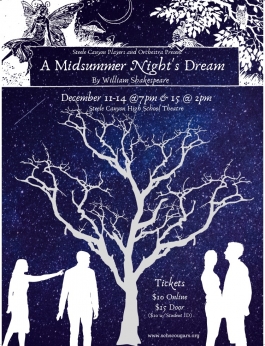 December 16, 2019 (El Cajon) - Steele Canyon Players and Orchestra presented A Midsummer Night's Dream last week, directed by Nicole Labella and based on the play by William Shakespeare. On the back of winning the National Youth Arts Award for their spring 2019 production of Les Misérables, San Diego/La Mesa Chapter and their award winning production of The Sounds of Music in spring 2018, it's obvious the players can do musicals. Can they do Shakespeare? Shakespeare can be hard. Old English is hard to understand. But besides a few rushed lines the production was well acted and funny.

This play has a special place in my heart, since I was in a version several years ago. One of Shakespeare's lighthearted romantic comedies in its truest form, the show can still be confusing as it interweaves three factions: Athenians, fairies and players (people in the play within the play). The fun comes when the factions cross paths. Mistaken identity, mischievous fairy's and eloping teens all add to the mayhem and delight of the tale. 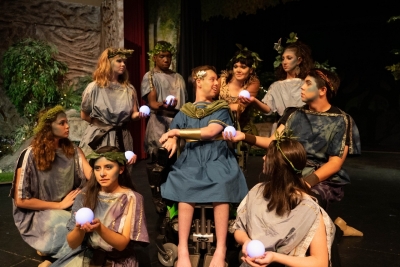 Steele Canyon is lucky to have Jason McIntyre as set designer. He went way beyond what you would expect to see at a high school play. Also presenting this production along with the players is the Steele Canyon Orchestra. It is rare for a high school play to be accompanied by an orchestra. The music did add to the tone of the play, although this is not a musical.

As for the cast, I'll list a few of my favorites. Jack Gardner played Demetrius. I've been watching Jack progress through The Young Actors Theatre in Casa De Oro the last few years and his experience had paid off. Sydney Villa played Hermia, who I thought did a great job. Hanna Guzman portrayed Puck, also a nice job. You could understand these actors more. Two more standouts come from the play within the play. Zane Kulian as Nick Bottom was my favorite and probably the audience’s favorite. He had a true talent for comedy. The last actor I want to comment on is Justin Chavez as Tom Snout; he made an excellent wall. Of course the cast is huge and the show needs everyone to make a production. Keep up the good work, Steele Canyon players. 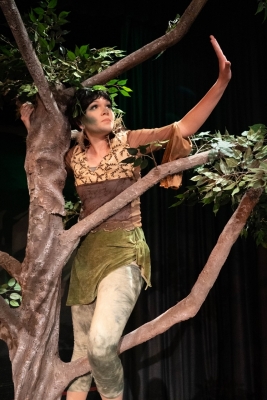 Steele Canyon is putting a lot of work and effort into their theatre program and it's well worth your time and support.

Be sure to join the Steele Canyon Players in March when they do Shrek. Musicals are their forte. I'm sure you won't want to miss this one. It's always a great show for the entire family.