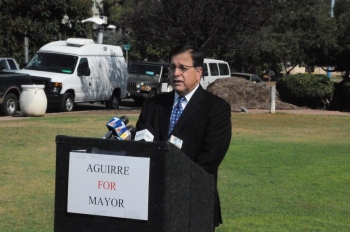 September 17, 2013 (San Diego)—Mike Aguirre, former City Attorney, launched his formal campaign for San Diego Mayor on Friday at the FDR Grove. He seeks to replace Bob Filner, who was forced out of office amid a scandal that rocked the city.

“The events of the last few months, provide San Diego with a historic opportunity to a better way to conduct the people’s business. Let us propose a new politics for San Diego, one that is not based on endorsements or special interest contributions, private agendas or the self-interested few.”

Aguirre promised that his administration “will restore integrity to the Mayor’s office and support policies that prove beneficial to the greatest number of San Diegans. That is what local government should be about.”

The diversity in this city also “set us apart,” as well as our weather, he added.

The top priority for Aguirre is to deliver vital city services including libraries, sidewalks, water and sewage services, a secure water and sewer infrastructure, “and a fairer rate structure from SDG&E.”

During the question and answer Aguirre was asked about his goal of water independence. He said that there is a goal to move the city to independence by restoring the watersheds, but also he intends to consult with both the Israeli and Australian water authorities. Both countries have very efficient water use systems, driven by harsh weather. Aguirre believes San Diego could benefit from similar systems.

Aguirre has been known for his combative style that has dismayed foes but drawn praise from supporters. Since leaving office he has focused on serving as a consumer watchdog, filing suits on behalf of SDG&E ratepayers and wildfire victims, among others.

There is no reason for San Diego to have among the highest prices in the United States. We need to negotiate directly with SDG&E and “to get a commitment from them to put rates on a path downwards,” he said. That means that SDG&E “will agree to lower prices in San Diego.”

Other priorities for Aguirre include energy issues and not having citizens of San Diego pay for the mistakes of the utility. This would benefit all ratepayers in the county, not just the City of San Diego, he noted. For instance ratepayers are still paying for the San Onofre reactors as if they were producing 100% power, according to Aguirre, and SDG&E wants ratepayers to foot the bill for cleanup and for buying alternate sources. It was SDG&E’s business mistake to use faulty steam generators and we should not pay for it, he believes.

Aguirre is concerned about focusing on the short campaign period and believes he can raise the necessary funds.

He also believes that having lost to Jan Goldsmith as the City Attorney in his reelection bid has made him a better candidate. He has pledged to keep the Mayor’s door open to the City Attorney, with whom he said he has a good working relationship.

Chiefly, he pledged to be a consensus builder, and to move the city forwards.

After the launch ECM, spoke with Maris Brancheau. She is a former resident of Borrego Springs who moved to San Diego to study law, and now interns at Aguirre’s legal office, but is one of his supporters as well.

Brancheau said that a key reason why she wanted to work with Aguirre is “his commitment to energy issues in San Diego. The San Onofre debacle that he is helping to uncover will hit San Diegans in their wallet.”  She also explained that Aguirre is deeply concerned about the environmental issues of decommissioning a plant that is surrounded by millions of people.

ECM asked Brancheau about backcountry energy issues. “Being from Borrego Springs myself, I am very familiar with the pressures for energy development in the East County,” she replied. She said that SDG&E has to be held accountable for the Sunrise Powerlink using natural gas in Mexico and failing to supply much green power as promised; this will not help the climate change issues, she noted.

“I believe Mr. Aguirre will hold SDG&E accountable for moving to more green sources of energy,” she concluded.