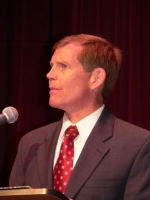 March 1, 2014 (San Diego)--Mike Lumpkin,  a Democrat who once ran against Republican Congressman Duncan Hunter for the district representing much of East County and San Diego, has been named Acting Undersecretary of Defense for Policy.

Now Congressman Hunter and his former appointment have found some common ground.

Secretary of DefenseChuck Hagel has assigned Lumpkin to work to account for 63,000 missing service personnel from World War II to today.  That includes efforts to bring home Sergeant Bowe Bergdahl, who went missing in Afghanistan in June 2009. He is reportedly  being held by Taliban insurgents, as a video believed shot in December confirms.

Lumpkin is a former  Navy SEAL who retired from the United States Navy as Captain Selectee after over 20 years of service. He also served ar Deputy Commander of the Joint Special Operations Task Force, Arabian Peninsula, for Operation Iraqi Freedom.

Congressman Duncan Hunter, also  a veteran who served in the Marines, has urged that  the effort to bring Sergeant Berghal home be under the purview of one person to cut through bureaucratic red tape. Hunter believed that while Central Command was engaged in the effort, there was not sufficient focus on finding these missing military members.

Bergdahl is the longest held prisoner of war since the Vietnam war, and the only known POW from the Afghanistan conflict.