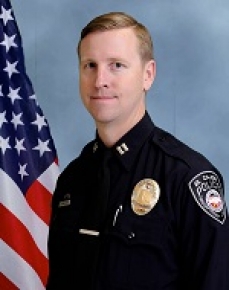 July 30, 2019 (El Cajon) - Earlier today, the City of El Cajon announced the appointment of Captain Mike Moulton as the next Chief of Police. Moulton replaces Chief Jeff Davis who will retire on September 12, 2019. Mike Moulton, 44, has worked for the El Cajon Police Department for the past twenty-four years.

During his time with the El Cajon Police Department, Captain Moulton has served in many valuable roles in the organization, providing him with a wide range of vital experience. Moulton has served as a Captain since 2015, giving him a broad leadership perspective of the Department. During his tenure as a Lieutenant, Moulton oversaw training, internal affairs, and served as a Watch Commander. As a Sergeant, Moulton led a special operations unit, supervised the department’s SWAT team, and served as a Patrol Sergeant. Moulton also worked as a detective and has community policing experience.
On the appointment, City Manager Graham Mitchell commented: “I have worked closely with Captain Moulton over the past two years. I value his community perspective on policing and I know he brings strong leadership and management skills to the department. He will work in a collaborative manner to address City issues.”
Mitchell further noted, “Mike has a desire for law and order and an ability to embrace technology to accomplish our goal to provide a safe community. I appreciate his view on being tough on crime while working smarter to address community needs. These are traits that align with my expectations for the Police department.”
Moulton’s base annual salary will be $197,828.80 and he will begin serving in this new role on September 13, 2019.