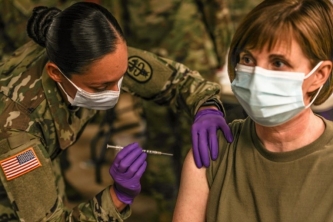 Photo courtesy of the U.S. Army

February 3, 2022 (San Diego) – All branches of the U.S. armed forces have begun discharging military members who have refused to get the COVID-19 vaccine. In the Army, Air Force and Navy, over 97% of all enlisted members in each service are now fully vaccinated.

“Unvaccinated soldiers present risk to the force and jeopardize readiness,” Secretary of the Army Christine Wormuth said this week, when the Army announced it had begun booting out soldiers who won’t get vaccinated. She added, “Army readiness depends on Soldiers who are prepared to train, deploy, fight and win our nation's wars.”

Navy Vice Admiral William Merz agrees; he has referred to vaccines as “biological body army” at a Pentagon press conference in January.

Thousands of military members have been issued reprimands and some have been discharged in each service.  Many have sought exemptions based on religious beliefs or medical reasons and are awaiting determinations made on a case-by-case basis. But very few such exemptions have been granted.

Those discharged will not be eligible for involuntary separation pay and may have to return any unearned or incentive pay.

The military has long required a variety of other vaccines to assure a healthy force, since disease can spread swiftly through the ranks of members serving in close quarters, such as aboard a ship at sea or in military barracks on land.

“The Biden military vaccine mandate is a destructive mistake that is ruining troop morale, negating force readiness, and destroying the lives of our best and bravest,” said Issa. “Hundreds of active-duty service members have reached out to my office fearful for their future. This mandate must be stopped before it does even more damage.”

Issa offered an amendment to floor legislation to prevent funding to be used to enforce the mandate for Guard and Reserve forces.

He also created a portal on his website for service men and women being threatened with discharge from the military. Hundreds of military personnel have been in contact with Rep. Issa’s office seeking assistance.

have to get over 16 vaccines for different things right-winger issa would know this if he would have served in the military instead of stealing cars!!! for these people to not want this vaccine is just another way as saying they should not be in the military

He had a bad conduct rating at one point, got demoted, and was accused of stealing a fellow soldier's vehicle:

He also made claims about his service record that were later proven false, including claiming he was part of a security detail for Nixon at a World Series game that Nixon didn't attend: