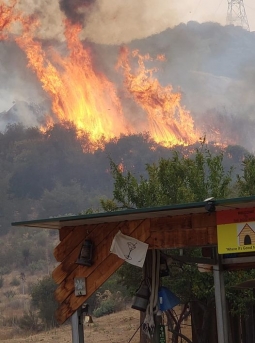 Update 3:45 p.m.  New mandatory evacuations have been given for Corte Madera south of Pine Valley.

September 7, 2020 (San Diego’s East County) – Dawn brought relief for many East County residents who evacuated or sheltered in place during the night, while firefighters limited the Valley Fire’s spread. View live-mapping of the fire perimeter at this link.

But today also brings new evacuations at Corral Canyon and Bobcat Meadows in Cleveland National Forest due to an immediate threat.  As a precaution, all campgrounds in the federal forest will be closed for one week.

Ken, a homeless man camped at the Boulder Creek Canyon who has lived for years at campgrounds in the federal forest, emailed ECM that he was given just two hours to get out this Labor Day holiday.  "I told the person I had been drinking and WOULD NOT drive drunk nor leave my home," he said.  "I said I will go when I am sober or they can arrest me before then...Apparently there is NO evacuation area to the EAST. I have to go out in the sun or go to Steele Canyon."

“Fire growth is impacting the Lawson Valley and Carveacres areas. There is an immediate threat to Loveland Reservoir and the surrounding water shed,” Cleveland National Forest reports today.  As of this morning, the blaze has consumed 10,258 acres, 408 more than yesterday.

Though the fire remains just 1% contained, there is some good news.

“Because of the proactive efforts of Cal Fire, today we will be exercising the agreement we have with the Navy Third Fleet and the First Marine Expeditionary Force to utilize military aircraft on the fire,” Cal Fire Captain and Public Information Officer Kendal Bortisser reports.

The bad news is that the National Weather Service predicts Santa Ana winds will sweep into our region tomorrow through Thursday, with gusts up to 50 miles per hour, along with continuing hot, dry conditions though slightly cooler than the record-shattering temperatures this weekend that hit 114 degrees in some of the fire-affected areas.

What a difference a day makes 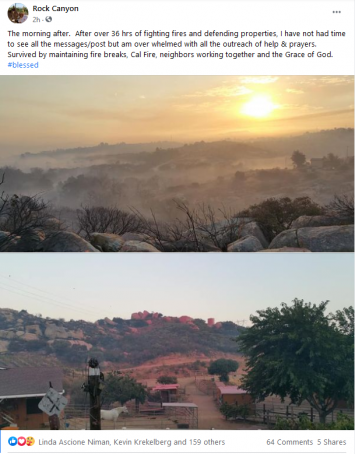 At Rock  Canyon Winery in Carvacre, a community near ground-zero for the Valley Fire, owners posted terrifying photos of flames engulfing dry brush on a hillside right behind the winery. The owners opted not to evacuate, leading friends to fear for their safety.  But early today they posted a “morning after” photo of the sun rising through a haze of smoke and hills sprayed pink from firefighting foam from aerial drops.

“After over 36 hours of fighting fires and defending properties, I have not had time to see all the messages/posts but am overwhelmed with all the outreach of help and prayers,” the owner posted.  “Survived by maintaining fire breaks, Cal Fire, neighbors working together and the grace of God.”

At Lions, Tigers and Bears rescue facility in the Japatul Valley area of Alpine, owner Bobbi Brink posted dramatic images and thanked community members for concerns, adding, “We are continuing to pray that the wind does not shift and the flames do not begin to come our way.”

But some were not so fortunate.  Eileen Menzies emailed ECM that she “lost it all” when flames consumed her home on Prairie Drive in the Lawson Valley area of Jamul. A widow, she has lived there since 1988.

"I am looking to buy a used motorhome," says Menzies, who is currently staying with her daughter in Spring Valley. "I left when I saw the fire come over the last hill. I got very few things out. The scary part is how crowded Lawson Valley Road can get with vehicles."

Governor Gavin Newsom has declared a state of emergency for San Diego County, the first step toward potential federal aid for the firestorm’s survivors.

Evacuation centers for residents and animals

The San Diego County Department of Animal Services is still accepting small animal rescues at the Bonita Animal Shelter for those impacted by Valley Fire evacuations, but has reached capacity for large animals.

Instead, people are being asked to bring large animals to a secondary nearby location, the Iron Oak Canyon Ranch (previously known as Bright Valley Farm), 12310 Campo Road in Spring Valley. County Animal Services staff will be caring for the horses at this site. Call (619) 236-2341 for more information. The San Diego County Department of Animal Services is still accepting small animals at the Bonita Animal Shelter

Due to the Valley Fire, the current road closures are in effect according the San Diego Sheriff’s Department and California Highway Patrol:

As a reminder, an evacuation warning means that evacuations are currently voluntary, but everyone should be prepared to evacuate and should evacuate if they do not feel safe. Residents who are asked to evacuate or choose to evacuate can go to Steele Canyon High School or Joann MacQueen Middle School. If you need emergency assistance with evacuation, call 9-1-1. For additional information, call the San Diego Sheriff Department non-emergency line at (858) 565-5200.

If you need additional information, visit sdcountyemergency.com or call 2-1-1.