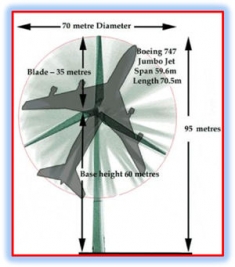 May 25, 2012 (San Diego’s East County) – The military has dealt a major blow to the wind industry, announcing that it may soon oppose  wind projects in the Mojave desert due to interference with military radar tracking aircraft.

The revelation raises questions over whether wind turbines also interfere with "avian radar" that wind companies claim could save birds from the blades.

Environmentalists now fret that eliminating military bases may result in project siting in areas where threats to wildlife and habitat may be even worse.

Radar concerns have already axed a half dozen wind projects near Barstow after the Department of Defense raised concerns.  Wind developers have been conducting testing in hopes of building up to 15 industrial wind facilities on public properties owned by the U.S. Bureau of Land Management, but adoption of a proposed “adverse impact zone” could scotch those plans.

Environmentalists have also raised concerns over wind turbines’ impacts on endangered eagles and condors, as well as fragile desert terrain and ecosystems.  But some fear eliminating areas near military bases may result in wind companies pushing projects in even more environmentally sensitive locations to meet California’s mandate to derive a third of its power from renewable sources by 2020.