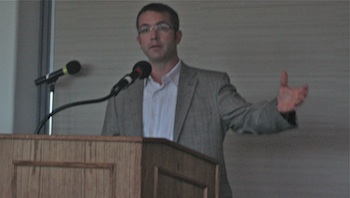 August 26, 2013 (El Cajon) - On August 12, Brian Castner, author of  The Long Walk, delivered a speech to faculty and staff at Grossmont College on how to reach out to military veterans.

His book, The Long Walk, tells the story of Castner’s outward struggle of serving in combat and inward struggle to find himself again after he had been home for a couple years.

“I felt like I went crazy.. I felt like I needed to explain myself,” Castner told ECM during an interview. So he wrote a book detailing his experiences. The book came out last year and is available online and in bookstores.

He was in the Air Force as an Explosive Ordinance Officer (EOD) from 1999-2007 and deployed to Iraq to command bomb disposal units in Balad and Kirkuk in 2005 and 2006.

“I was in the military bomb squad, working with different services,” he recalled, “and we tried to search for people making the devices.”

He was in the Air Force ROTC at Marquette University and then joined the military after college when he was commissioned as a 2nd Lieutenant. He now lives outside Buffalo, New York with his wife and four sons, and is a full-time writer.

When asked what advice he would give to families going through what he’s been through, he answered, “Patience and loyalty. The biggest challenge is that they’re not understood.” Bridging the gap between the family and veteran isn’t easy, he noted.

“Each family doesn’t need to solve the whole veteran’s crisis or trying to solve all of society’s issues with veterans,” he advised. “Just reach out to the one you’re closest with.. Be ready with that understanding and meet halfway.”

Asked if there’s more that needs to be done for veterans, he replied, “That’s tough. You could always do more. There’s always going to be a gap between what the government can provide and what the vet needs…I’m really active with the EOD Warrior Foundation, you’re helping people you know best. There’s always going to be community groups,” he added of charitable efforts to help veterans.

Asked if writing the book changed his perception of war, he replied, “I think writing and explaining did a little, but more so going through war itself.”

He opened his speech by thanking college officials for inviting him to speak. “I love San Diego. San Diego is an interesting place to talk about veterans in our schools,” he said.

Then he listed some facts. “As we’ve shrunk our military presence, what you end up with is a small military town and a lot of military people. I learned today that Grossmont College has 18,000 veterans. About 10% [of students] are military veterans.”

He spoke of why he was chosen to speak on this topic. “I have no special qualifications, except I’m a vet and I wrote a book about it. I have plenty of struggles…Speaking for veterans is challenging. Everybody’s fought their own war; everybody’s different.”

He listed some disturbing numbers. “One of the numbers is 19% of veterans kill themselves in the past (from a 2008 study). This year, the VA put the number at 22%. Among younger veterans, the number of people committing suicide is lower than the general public. The number one reason people tried to commit suicide in the military, but failed, is because of relationship issues.”

He learned this when he had gone to a school in De Anza.  “The feeling is ‘nobody knows what I’ve done.’ A lot of the time, veterans are in school and their [dead] friends aren’t. You just have a ghost looking over your shoulder wherever you go.”

Another difficulty is the questions veterans are asked, such as, “Did you kill anyone?”  Castner observes, “The answer for most of us is ‘Probably. We hope we didn’t.’”

Another issue for veterans is the “warrior ethos that says ‘I don’t need help. I do things.’ It’s difficult to admit you need help,” he said.

He has also advised veterans he has talked with to reach out to those in another country, such as joining the Peace Corps and helping people in poverty.

He concluded, “Combat trauma is an injury and not a mental illness. When your brain gets blown up, it releases all sorts of chemicals. It can be an injury...you recover from. The good news is that 10% of students [here] are goal-oriented. They’re planners, they’re mission driven…They may be quiet or tired,” he said, adding, “They can also be a model student.”

Then he answered some questions from the audience.

One person asked, “In your opinion, why does the government send people to the same area when exposure is harmful?”

Castner replied, “They keep sending people who have volunteered. Until you’re declared mentally unfit to go, you keep going. The government didn’t understand what effects the bomb had on the brain in the past. Now, you go through tests.”

Someone else inquired, “Do you know of any efforts to bring vets and immigrants together in a dialogue?”

Castner said, “That’s tough. It depends on which group it is. Nationally, [there’s] not a lot.”

A woman asked, “Would veterans prefer to be in a collective class? Do they mind being asked if they’re veterans? I thank veterans for their service. Do they like that?”

Castner told her, “I’m not sure if veterans like the attention drawn on them. When people thank me, I don’t know what to say. We so overly support; we put bumper stickers on a car. Then that’s it. We’ve forgotten.”

Another person noted, “A lot of veterans are homeless. Anything for resources?”

Castner answered, “That’s tough. I simply don’t know. Some of the veterans’ organizations I support puts them back in the same unit.”

For more information on Castner and his book, visit: http://www.briancastner.com