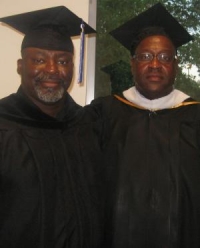 Peg Marcus, President of Associated Students at Grossmont introduced Torrence, a re-entry student who chose to have a career, start a family, and then return to college. He also graduated with his daughter Jacquelyn ‘Jade.' Marcus received his Associates in University Studies Social and Behavioral Sciences. Jade got her degree in University Studies Communication and Language Arts. She has said she is “very proud” of her dad. “He has a better GPA than I do, and I’m the one going to school for the last 20 years.”

He also has three other children, Nikkole, who studied culinary arts at Grossmont College, Andrew, a former Grossmont College student who was killed in a motorcycle accident in 2007, and 12-year-old Ciara. His two grandchildren, Jordan and Laylyn, have been attending Grossmont Child Development Center.

“When I walked on the Grossmont College campus back in the fall of 2009, I knew this college was an excellent choice,” Torrence recalled in his speech. “However, Grossmont was a huge culture shock for me… I did not have much experience dealing with these young people referred to as ‘Generation Me.’ I was exposed to a varied assortment of dress and mannerisms that I had not seen in the Marines.” He thanked his professors for their patience, adding, “Fellow veterans, having this chance to stand among you again at Grossmont has been a reminder as to why I spent 22 years in the military. It is a bond we share that transcends words.”

His voice broke as he began talking about his deceased son, Andrew. “He was the most incredible person I have known and he will always be the best part of me.. So this education is not mine alone as much as it is a continuation of Andrew’s college dream as well… I hope my son lives through me.”

He gave his fellow graduates a few words of wisdom. “We go now out into the world better equipped with more wisdom and knowledge… Remember success in life…can simply be gauged on the positive impact you have on your loved ones, dear friends and your community.” He also learned, through Andrew’s death, to let go of the guilt and just cherish each day and love.

He concluded, “I will leave you with something my parents recently told me, ‘Stand up to be seen, speak up to be heard, and sit down to be appreciated!’ We did it Andrew.”  Quoting the Marines motto, he closed, “ Semper Fi (Always Faithful).”

Chris Hill, acting Vice President for Academic Affairs, introduced Reverend Smith as an alumnus of Grossmont College. He was taunted for a severe stutter as a child. Later he overcame an addiction to crack cocaine through faith and hard work, and got a degree in Ethnic Studies in the 1990s. Then, he went on to Christian Heritage College and got a Bachelors in Human Development. In 1999, he started the Loving Care Outreach Ministry, which reaches out to those in need including addicts, alcoholics, inmates and troubled youth. He owns a painting company called the Caring Painters founded in 2004 and in 1999, he founded a non-profit organization, the Loving Care Center, which serves the elderly in skilled nursing facilities.

Rev. Smith first thanked his former English teacher, Cathy Harvey, “for making it possible for me to be here. But I must admit my feelings… were not pleasant at first because she returned my papers covered in red ink correcting me. I didn’t like her messing up my papers. Now she is a dear friend.”

He shared his troubled upbringing. “I was born in Chattanooga, Tennessee, during the time of the Civil Rights Movement. My family and I knew poverty well. My parents were illiterate. I had a severe stutter. These circumstances qualified me for a bad start in life.. Fear held me captive each day.. Weaknesses were all I could see because of my speech problem.. My vision was limited to my world view. The drugs came to my rescue. [But] I found only discomfort, distress, and displeasure with my choices.”

He shared with students that “we have learned that fear prevents us from growing and gaining the experience needed for growth to take place. We have learned that our weakness is a call to become stronger by working harder. We have learned that the world cannot be painted with a broad brush, and that our views need to be reviewed for accuracy. We have learned that having fun with the wrong thing can cause addiction that brings on many pains, shame, fears, and tears. But most of all, we have learned that hard work will pay off!” He quoted Ralph Emerson: “The things that lie behind us and before us are tiny matters compared to what lies within us.” Then, he quoted Helen Keller: “One can never consent to creep when one feels an impulse to soar.” He ended, “We change lives through education and we are the leaders of tomorrow.. We never cease learning and reaching for that higher goal of purpose for the benefit of society and betterment of the people.”

At the beginning of the ceremony, Chancellor Cindy Miles told the students, “Now you have something you can’t lose and no one can take away from you. And that is a college education. We are tremendously proud of you.”

Sue Gonda, President of the Academic Senate, presented the Distinguished Faculty Award to Geology and Oceanography Professor Gary Jacobson, who has been a full-time professor at Grossmont College since 1989. He feels everyone has a responsibility to take care of the earth.

Dr. Sunita ‘Sunny’ Cooke read some facts about the graduating class. “Total 2,159 graduates, which is up significantly from last year. Fully half of the students are between ages 20-30. The oldest is 76 years old. The youngest is 19 years old. There are 79 international students. Seven students have a perfect 4.0 GPA.”

ECM also got a chance to interview Torrence and Smith. Torrence hopes to get his Bachelors and Masters and become a military social worker. He noted, “I’m in counseling, community activism, and social work.” He currently works for the San Diego Dad Corps of the nonprofit Social Advocates for Youth as a case manager helping fathers become more positively engaged in their families. He has been a substance abuse counselor at San Diego State from 2001 to 2011.

The biggest challenge he faced when transitioning to civilian life was “going from being a hero to a zero. I had a nice niche [in the Marines]. It was a real tough transition.” He also received the GI bill, which he commented could be “very good if used the right way.” Life in the military was “always changing. It was very demanding physically and mentally for the family.”

Growing up in the Civil Rights Movement showed Smith that “there was a line drawn, two different worlds, white and black. I watched things very closely. There were differences in terms of treatment, access, and the system set up.” He is currently disabled after serving 8 years in the Navy from an accident while serving in San Diego.

While in the Navy, Smith worked in the personnel office. He overcame his addiction by “forc[ing] myself to get into situations, where I could talk, for instance a salesman job. It forced me to do something I didn’t want to do. It was very painful, but I was patient with myself.”

When asked what made him decide to turn around, Smith said, “mainly multiple losses. All I could see were negative things happening to me, realizing my life was in shandles and I was powerless to drugs.” He admitted that it wasn’t easy. “I never experienced anything that was so dictating. I was also very difficult in that I didn’t want to give into the feeling; I constantly fought it.” The message he can give to others struggling is: “Utilize this time while going through the difficult time to analyze self and your motives. Ask ‘What triggered it?’ etc. These will give you greater insight into yourself and you can work with it. The main thing is to never give up.”