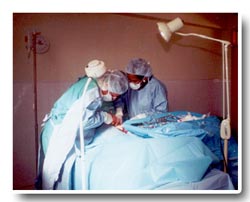 January 14, 2010 (Mt. Helix) – “It would say it’s an act of God,” Dr. Carolle Jean-Murat told East County Magazine upon learning that a hospital she has helped to support still stands amid the rubble of the 7.0 earthquake that ravaged Haiti. “People built it with their own hands…The hospital is still standing except for the E.R.," she said, "but many of the homes are flattened.”

Murat, a native of Haiti who now lives in the Mt. Helix area, has led efforts to help meet the health and educational needs of people in Haiti for the past 24 years as co-founder of Angels for Haiti. Now she is organizing a fundraising drive to bring water, food, and first aid to save survivors of the quake that has killed over 100,000 people. To donate and learn more, visit www.healththroughcommunications.org.

“The same area was hit by four hurricanes in two months in 2008,” she said. “The roads were damaged and we were starting to rebuild.” Of 12 basins recently built to collect water and prevent illness, ten were destroyed. “We were barely recuperating from the hurricanes that destroyed the area and now we have an earthquake,” Murat said. 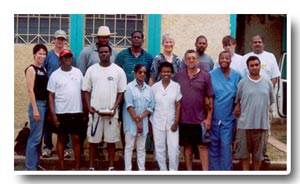 The Hospital St. Joseph was built by hand with a team of volunteers from the Codeva organization in Ridore in La Valle de Jacmal. Angels for Haiti sends teams three times a year to the area and recently helped raise money to build a water tower. “Just imagine a hospital with no water,” said Murat, who confirmed that the new water tower is still standing. “But in the surrounding community, many of the homes are flooding up,” she said.

The nearest other hospital is in JacMal, at sea level, where damage has been heavy. “We are 3,000 miles above sea level. I don’t know how we survived,” said Murat, who learned that the hospital was still standing after hearing from her fiancé, Gody Boursiquot, who has led efforts to help Haitian children.

Boursiquot was in Haiti when the earthquake struck. “We were terribly worried,” Murat said, adding that her fiance was able to place a call to his father in Boston informing him that he’d survived—and so had the hospital.

The needs of others, however, are staggering. Bodies are stacked up in the street and in hospitals. There is not enough water and survivors will soon perish if not enough can be brought in quickly, according to news accounts on the major broadcast stations. “A lot of the children are dying,” Murat said. “We have problems all over the country.”

A community center built thanks to the efforts of Murat and her organization in Au Tuff has been particularly hard hit, with major damage including a cracked roof. In the surrounding area, it’s even worse. “Ninety percent of the homes are flattened,” she reported.

Water for Children Africa, a group founded by Vickie Butcher of El Cajon, is also working with Murat to provide donations of water for the people in Haiti.

In addition to donating online at www.heatlhroughcommunications.org, people can attend an Open House for Haiti fundraiser on January 23 from 2 to 8 p.m. at Murat’s Mt. Helix home. For directions and to RSVP, contact her at carolle@drcarolle.com.