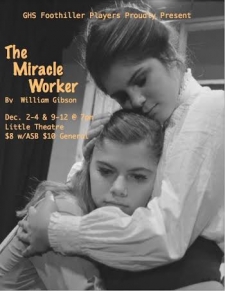 November 24, 2015 (La Mesa) – The Miracle Worker, a play that depicts the amazing life of Helen Keller, will be presented by Grossmont High School’s drama department December 2-4 and 9-12. 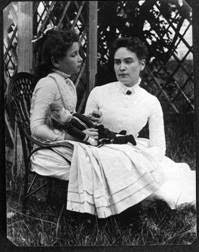 Blind and deaf after suffering a terrible fever as a baby, young Helen Keller (played by Ingrid Brinton) has spent years unable to communicate, leaving her frustrated and occasionally violent. As a last chance before she is institutionalized, her parents (Jennifer Burch, Matt Tyssee) contact a school for the blind, which sends half-blind Annie Sullivan (Bella Snyder) to teach Helen.

Helen is initially resistant, but Annie gradually forms a bond with her and shows Helen ways of reaching others.

Performances will be at Grossmont High School, 1100 Murray Drive, La Mesa. Tickets are $10 for General Admission and may be purchased at the door.