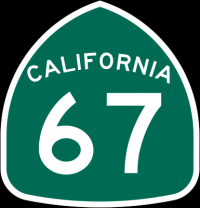 April 19, 2017 (El Cajon) – A 9-year-old autistic girl who went missing from her home in unincorporated El Cajon yesterday morning was found on an onramp to State Route 67 at Bradley Avenue.

The child’s father had placed a frantic call at 9:45 a.m. reporting his daughter missing from their home at East Bradley and Graves Avenue in unincorporated El Cajon. He reported that he had seen her just 10 minutes earlier eating breakfast in the family’s kitchen. He took a shower and when he came back, the front door was open and the girl was gone.

“Numerous Sheriff’s patrol, detectives and ASTREA, the Sheriff’s helicopter, were dispatched to the area to begin an immediate search,” said Sergeant Tim Chantler.

But a few minutes later, it was a citizen who located the child on the highway onramp. She was unharmed and reunited with her family.