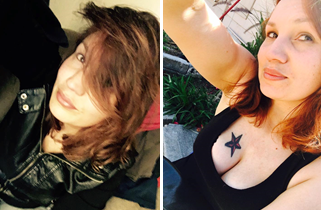 October 7, 20127 (San Diego) – Alexandria Nicole Smith, 30, left her home near San Diego State University last Monday morning around 11 p.m. in her grey 2015 Toyota Corolla (license 7CPB649).  She hasn’t been seen since, though her cell phone was found thrown in a dumpster in Vista on Wednesday.

Her mother, who reported her missing, believes her daughter was going to a party in National City, the San Diego Union-Tribune reports. National City Police are asking public help to find her.  The missing woman has a young daughter and both live with Smith’s mother.

Smith, who attended Garfield High School in the past, is described as 5 feet 4 inches tall, weighing 130 pounds. She has red hair and brown eyes, as well as several tattoos including a star on her chest, a peacock and a lily on her back.  She was wearing a blue sweater and jeans when last seen.

Her family told police that she has suffered from depression and has a history of drug use.

If you have information, you’re asking to call National City Police dispatch at (619) 336-4411 or email Detective Ken Springer at kspringer@nationalcityca.gov.

It saddens us to lose our beloved Alex. If anyone would like to donate to help Alex’s family, you can do so using the following link to her family’s go fund me page: https://www.gofundme.com/2gjtv-alexandria-nicole-smith Thank you