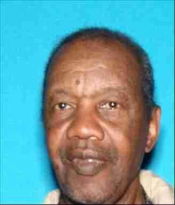 Update: Louis Lake has been located.

October 10, 2012 (Lemon Grove) – San Diego Sheriff’s Department seeks public help to find a 72-year-old missing man considered at risk.  Louis Lake Sr. was last seen by his daughter on October 9 at 1:30 p.m. in their resident in the 7000 block of Central Avenue in Lemon Grove.

Lake is black, 6 feet four inches tall and weighs 240 pounds with short black/gray hair and brown eyes. He was last seen wearing a black leather jacket, khaki pants and a brown shirt. He walks with a cane and often wears a baseball or cowboy hat.

Lake has unspecified medical issues. He often walks to the trolley station and/or the 99 Cent Store area near Lemon Grove Avenue and Broadway in the City of Lemon Grove. He has no known companions other than his immediate family.