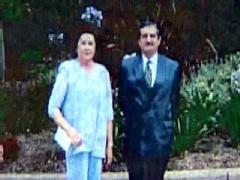 June 29, 2011 (El Cajon) – An injured man who called 911 after falling down an embankment last night has been found following an intensive search and will be transported to a hospital, Melissa Aquino, public affairs officer with the San Diego Sheriff’s Office, advises.

The 911 call was handled by El Cajon Police at 7:06 p.m. last night. Edward Barber, 67, told a dispatcher that he got lost driving home from a restaurant, got out of his car and fell down an embankment. The dispatcher remained in contact with him until 8 p.m. Sheriff’s deputies from the Lemon Grove station, along with an ASTREA helicopter and El Cajon Police officers searched for the victim until 2 a.m., then called off the search until morning.

Today, the search resumed at 10:30 a.m. with Sheriff’s Search and Rescue (SAR) volunteers as well as a K-9 dog unit. ASTREA found Barber’s car on Camino Monte Sobra, a dirt road about a half mile from the nearest house, at 11:40 a.m.

Search teams were mobilized in an area within one mile of the vehicle. Volunteers from SAR found the victim alive at 1:40 p.m. about a quarter mile from his car, north of Singing Hills Memorial Park.

“Sheriff’s ASTREA is rescuing him and will fly him to Singing Hills Memorial Park, where an ambulance is waiting to take Mr. Barber to a hospital,” Aquino confirmed.