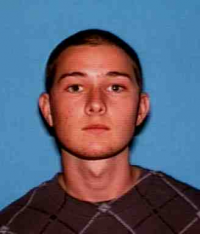 June 14, 2012 (Penasquitos) - San Diego Police have been advised by authorities in Orange County that Kevin Stapp has been found, according to Lt. Andra Brown with SDPD.

Scroll down for our prior report on his disappearance.

May 23, 2012 (Penasquitos) – Family and police are baffled by the case of missing teen Kevin Adrien Stapp, 19.  Last seen during the day on May 6 in the Penasquitos Canyon area, Stapp told his mother that he was going to the store for supplies, but never came home.

He was driving a bright royal blue 2002 Hyundai Accent,  CA license #4WPN955, similar to the one pictured at right.

His mother told police Stapp was not depressed and is “a great kid,” Parga said. “I’m baffled. His friends are just as baffled.”

Stapp left his cell phone behind. His credit cards have not been used.  He does not own a passport and a search of border surveillance tapes show no indication of a crossing.

Police conducted a search by helicopter looking for the vehicle, initially believing Stapp may have had a car accident. But the car has never been found.

Media was not notified of his disappearance until yesterday due to family’s wishes, Parga said.

Parga resides in Rancho Penasquitos. He is described as white, 5 feet 7 inches tall, 165 pounds, with brown hair and hazel eyes.