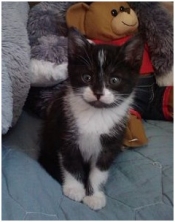 May 5, 2011 (Harbison Canyon) – “A kitten that looks very much like the pic I have attached (our 8 week old kitten) was picked up by a hawk and dropped in the road on Harbison Canyon right down the street from Shadow Hills Elementary,” Kelly Vitek said in a post on the Blossom Valley Network community forum. According to her report, the incident was witnessed by three people, including Vitek’s husband.

“He said the kitten was freaked out but was alive and moving,” she added.

A woman at the scene reportedly picked up the frightened animal with a sweatshirt and said she was taking it to the Humane Society. “So if you’re missing a kitten that looks just like ours, call them ASAP,” Vitek advised.