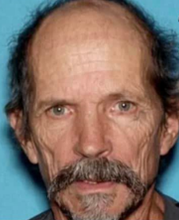 July 27, 2022 (Pine Hills) – The body of Terry Hughes, 76, has been found, according to a post by Cheryl Bakken on the Find Terry Hughes Facebook page. Hughes left his Pine Hills home near Julian for a walk Monday around 4 p.m.

“I'm sorry to let everyone know that Terry Hughes has been found and he is deceased,” Hughes wrote on July 23. There have been no details released. The family would like to sincerely thank everyone for the help and support given this past week from the entire community. Julian is an amazing community.”

Hughes had Parkinson’s disease and walked hunched over, but still enjoyed going for regular walks. His wife, Constance, told 10 News that Hughes had planned to go walking with his wife and her sister, but when the sister was running late, decided to head out on his own and let the women catch up with him.

ECM has contacted the Sheriff’s department for details on the search and the circumstances of Hughes’ death, but has not received a reply.  No notifications were sent to media by the Sheriff department during the time Hughes was missing, though a search was organized after his wife immediately reported him missing.