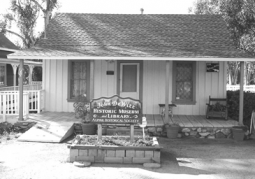 "This morning I went to the club house to let a couple of members into the basement. I went into the kitchen for a glass of water and couldn't believe my eyes. There, laying flat, on the kitchen table was the historic quilt and the throw, with no note. It is an Alpine Woman's Club Mystery with a very happy ending."

The quilt was made in 1999 to commemorate the 100th anniversary of Alpine’s Town Hall.  Alpine Women’s Club sought public help to locate and return the heirloom, which Anderson speculated may have been sold by accident at a craft fair. The quilt include names of about 60 members, each in a small square with a needle point design unique to each person. In the middle of the quilt, the words Town Hall 1899 to 1999 appear.