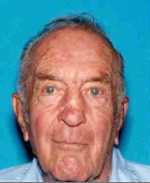 January 23, 2012 (El Cajon)—The San Diego Sheriff seeks public help to locate Richard Hiel, 83, who suffers from early onset dementia and diabetes.  He was last seen driving a red 2000 Ford Ranger pickup truck (license CA 6A11090) away from his residence today at 2 p.m. at 2040 Marlinda Way in the unincorporated area of El Cajon.  He was wearing a beige raincoat and uses a cane to walk.

“Hiel gets lost frequently and is confused quite often,” said William Brecheisen with the San Diego Sheriff.

He is white, has gray hair and blue eyes, is 5 feet 4 inches tall and weighs about 130 pounds.

If you have information on his whereabouts, call the San Diego County Sheriff’s Department at (858)565-5200.