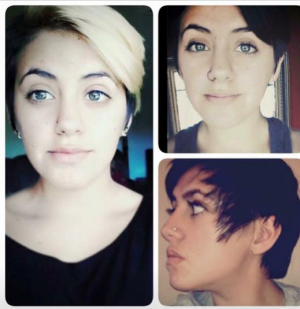 Update Oct. 6, 2015 - La Mesa Police report that this missing juvenile has been found with friends in Imperial Beach and has been returned to her family.

Update Oct. 4, 2015 1 p.m. - Olivia's mother confirms that a friend received an Instragram message that appears to be from Olivia.  The message indicates she is safe but does not want to come home.  It is not certain whether the message was sent by Olivia or possibly by someone with access to her account.

October 4, 2015 (La Mesa) – Public help is sought to locate Olivia Miller, 14, A Guatay resident who vanished Friday night in La Mesa. She was last seen at 7 p.m. at the Journey Community Church at 8363 Center Drive.

According to La Mesa Police dispatch, Olivia is 5 feet 1 inch tall, weighs 110 pounds, has black hair and green eyes. She was last seen wearing a white baseball cap, black shirt and black pants. She may also have been wearing a white cardigan and carrying a brown backpack, her mother has advised East County Magazine.

Olivia’s mother, Sherrie Jockell, says Olivia had a picnic dinner with family at the church before services.  An assistant teacher in a class at church, Olivia never made it to class after dinner.  Family realized she was missing after the service, when she did not return to their car.  Olivia made no mention of going anywhere after church to her friends or family.

Jockell says Olivia is a responsible teenager who has never run away, never failed to show up where she is supposed to be, never been out past curfew, never had any known issues with drugs or been in any trouble with the law.  Her birthday is coming up and she was talking about what she wants to do, making plans for near future,” she said.

Olivia did not have a cell phone with her. She had a tablet computer but it does not have GPS activated.  has not been active on her social media accounts since she went missing. She had just returned Tuesday from being out of town for a couple of weeks in Hollister, California helping her sister move, Jockell added.

Jockell voiced frustration because she says La Mesa Police have not sought a warrant to gain access to her missing daughter’s social media passwords in order to check and see if she could have been in communication with anyone that could provide a clue to her whereabouts or whether she could have met a potential predator online. “Because there are no signs of foul play, no one saw anyone forcing her into a vehicle, they are treating her like a runaway,” Jockell told East County Magazine, adding that her daughter's passwords were recently changed.

NBC 7 news reports that a countywide be-on-the-lookout bulletin has been issued by police.  Family has been passing out flyers around town in hopes of finding the young missing teen.

Journey Community Church had posted on Facebook that the teen had been seen later at Grossmont Center, but Jockell says family now believes that was a false lead.  After friends and family members canvassed Grossmont Center on Saturday, a clerk at Charlotte Russe said she recognized Olivia and thought she had shopped there on Friday night, however surveillance video did not show Olivia. Olivia has shopped at Charlotte Russe in the past so the clerk may have remembered seeing her on a different date.

Oktoberfest was underway not far away in downtown La Mesa, with crowds of people from across the county.  Family is hoping that someone has seen Olivia and asks for anyone with any information to please report it.

“Our hearts go out to Olivia and her family,” Journey’s post on Facebook states. “Every member of our community feels the weight and the gravity of this situation.”