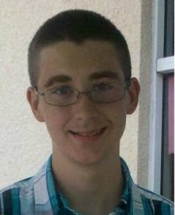 July 26, 2011 (Bonita) – San Diego Sheriff’s office today notified media that 14-year-old Luke Roundy, aka Michael McWilliams, disappeared the night of July 15. The teen and his family are from Texas and were staying with relatives in the 3800 block of Alta Loma Drive in Bonita.

Luke left without telling anyone where he was going. The boy’s mother told authorities he has a history of running away. In past runaway episodes, he has visited Wal-Marts and panhandled. Deputies are canvassing local Wal-Marts and distributing flyers. The Sheriff’s Imperial Beach station received reports that Luke was spotted on a trolley in downtown San Diego on Sunday, July 24 during Comic-Con.

Luke is 5 feet 8 inches tall and weighs 130 pounds. He is Caucasian with brown hair and blue eyes. He was last seen wearing a gray collared shirt, jeans, and black sketchers shoes with red stripes. He also wears gold wire-rimmed glasses. His birthday is June 19, 1997.