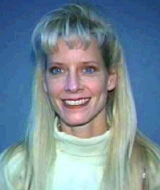 She was an accomplished equestrian and is familiar with back roads and trails in both the Cleveland National Forest and Anza Borrego Desert State Park.