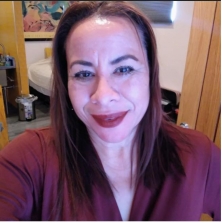 July 1, 2022 (Jamul) – San Diego Police seeks public help to find Norma Hernandez,  On Monday afternoon, June 27, she told family she became separated from a group traveling north on foot. She was last known to be in an area southwest of Dulzura. Her cell phone’s last location was in the vicinity of Jamul on June 30.

·Attempts to locate her have not been successful thus far. Due to possible exposure to the elements, Hernandez is considered at risk.

Hernandez is described as a 50-year-old Hispanic female with brown hair and brown eyes, wearing a dark shirt and camouflage pants, about 5’5”, and weighing about 180 lbs. She speaks both English and Spanish.

If anyone has information related to Norma Hernandez’s whereabouts, please contact the San Diego Police Department Communications Division at 619-531-2000 and reference Case #22-500546.