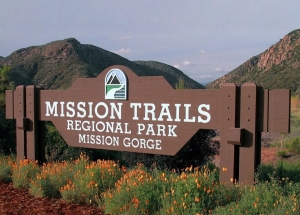 August 20, 2017 (San Diego) – Already one of the largest urban park in the United States, Mission Trails Regional Park is expanding by 178 acres, to a total of 7,400 acres.  The addition is due to a dedication by Pardee Homes as open space mitigation for its 415-unit housing development, Weston, formerly known as Castlerock in Santee, just off State Route 52 north of Mast Blvd.

The developer worked with the environmental groups Preserve Wild Santee, California Chaparral Institute and the center for Biological Diversity to expand Mission Trails and preserve habitat for endangered species.

Pardee also dedicated close to 100 acres of its Weston site to be preserved as open space. According to Pardee, the arrangement helps protect Quail Canyon Creek as well.

The development has been a decade or more in the planning, helping to meet demand for housing in East County, but drawing opposition from many residents concerned about increased traffic and environmental concerns. Environmentalists worked to hammer out the best deal possible under the circumstances.

“The dedication of this scenic wildlife habitat will be a crucial step forward for our greater vision of linking Mission Trails Regional Park with Sycamore Canyon Preserve,” says Van Collinsworth with Preserve Wild Santee, the San Diego Union-Tribune reports.  He added that such linkage is essential for recovery of threatened and endangered species such as the California gnatcatcher and the Quino Checkerspot butterfly.

San Diego Mayor Kevin Faulconer observes, "Mission Trails Regional Park is truly a jewel in the City of San Diego's world class parks system. It isn't often that 178 acres in the middle of an urban region are dedicated to park use, making this act of environmental preservation truly significant,” the Mayor concludes, adding, “Partnerships such as this will make our city more sustainable and enjoyable for all San Diego residents, visitors and future generations."

The company overbuilt areas like the Miramar area that had no police or fire stations and at the time Miramar Road was the only way in and out. A disaster waiting to happen.
They did build some custom homes in other areas that were really nice.