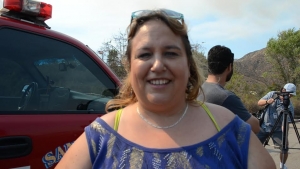 July 13, 2014 (San Carlos) The “Trails Fire” scorched 90 acres at the Mission Trails Park today. The fire started near the Junipero Serra Trail near the visitor center and was first discovered and reported to fire officials by the Bieker family from El Cajon. 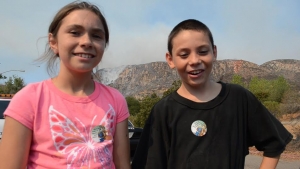 The fire at this point is 90% contained, according to fire officials. It was 30% contained when ECM talked with Lee Swanson, San Diego Fire Department Spokesman at the Command Post.

He told ECM that the fire was in very rough terrain, and that they brought over 200 fire personnel to be able to rotate them in and out. He also said that all hikers were evacuated and there was one heat related injury that sent a firefighter to the hospital.

He added that there were no civilian casualties and that all hikers were evacuated from the mountain. 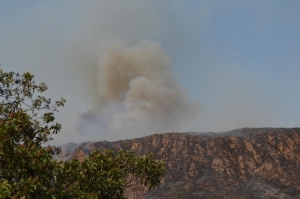 The two children, M and H Bieker, found the fire first and told adults in the party, who called 911. According to Margaret Bieker, the grandmother, it took the Fire Department about five minutes to arrive on scene. The fire had grown from a small spot, to making a run up the mountain by the time fire officials arrived. 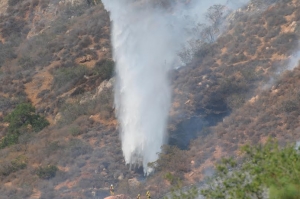 The Park will be closed on Monday for the fire investigation. According to the CHP CAD there are still a lot of units at the fire, and Swanson said that units were going to stay on the mountain overnight.