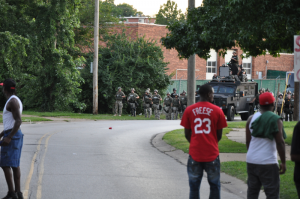 August 17, 2014 (San Diego)--City Heights residents organized a “hands up” tribute late Thursday in San Diego as part of a nationwide event calling attention to the police shooting death of unarmed black teenager Michael Brown in Missouri. About 100 gathered, wearing red ribbons on their arms. They joined hands and held a moment of silence for all victims of police violence.

Witnesses have said that 18-year-Michael Brown old had tussled briefly with an officer before running away. Police say Brown pushed the officer into a car and tried to grab his weapon. The officer fired shots and according to the witnesses, Brown first tried to flee, then turned around and put his hands in the air to surrender. But the officer kept firing, killing the young man, who had not been accused of any crime.

The event sparked outrage nationwide and riots in Missouri. Police initially refused to divulge the name of the officer, citing fear for his safety.  But after public pressure and media attention, the officer’s name was released.  Police claim that a surveillance video shows that a robbery suspect who stole cigars and roughed up a clerk at a nearby store resembles Brown. Brown’s family has denounced police, claiming they are now trying to smear his name to divert attention from the shooting.  The teen had no prior arrests.

The officer however was not in pursuit of a robbery suspect, but instead had stopped Brown for walking in the middle of the street, potentially obstructing traffic.

Over the weekend,  tensions escalated in Ferguson, Missouri, where gun violence, tear gas and police rolling out armored vehicles occurred during the first night of a curfew imposed in the St. Louis suburb where the shooting occurred.

The incident has raised questions over racial profiling by police as well as the increasing militarization of police forces buying up second-hand gear and vehicles from the U.S. military, sometimes at a small fraction of the original costs.

In San Diego, Police Chief Shelly Zimmerman issued a statement saying she will not tolerate racial profiling among local officers:  http://voiceofsandiego.org/2014/08/14/zimmerman-i-will-not-tolerate-any-instances-of-racial-profiling/.  The San Diego police have been accused of racial profiling in traffic stops in recent months, as well as sexual assaults.

In Rialto, California, use of body cameras by police had dramatic results.  Use of force complaints fell by nearly 60% in one year and complaints against officers dropped by 89%.  When people know they are being recorded on video, both officers and people stopped by police tend to behave better, experts have said, though the devices do raise privacy issues.

A petition calling for mandatory use of body cameras by police nationwide has been posted  on the website for the White House and thus far, has drawn over half a million signatures.