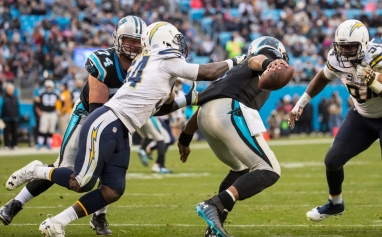 December 12, 2016 (Charlotte) - On Sunday, the Chargers traveled to Charlotte to take on Cam Newton and the Panthers.

For once, the Chargers didn’t score on the first drive of the game; even without Luke Kuechly, the Panthers defense proved an unstoppable force.  The Panthers on the other hand moved downfield, but the Chargers defense held them to a field goal.  Carolina led 3-0.  They were able to put together a more successful drive with a march down the field and a Jonathan Stewart punch-in for the touchdown and a 10-0 lead. 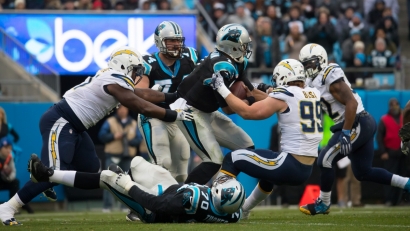 In the second quarter, the Panthers, who were 4-8 before yesterday’s game, showed signs of the 15-1 team that went to the Super Bowl a year ago.  At the goal line, Newton threw a short lob to Devin Funchess in the endzone for another score.  The Panthers went up 17-0.  Graham Gano added three more on a 44-yard field goal and Carolina was up to the 20s with a 20-0 lead.  After a Chargers interception by Jahleel Addae that was reviewed and overturned, he kicked another one and Carolina led 23-0.  At the end of the first half, the Chargers got on the board with a much-needed touchdown pass caught by Hunter Henry.  They still trailed big at the half 23-7.

In the second half, much of the same pattern followed.  Though the Chargers were able to keep Carolina out of the endzone on their first drive of the half, Gano kicked a 23-yarder and made the score 26-7 Panthers.  After the Chargers were stuffed in the redzone, Josh Lambo kicked a field goal of his own to get the Chargers into double digits finally, still trailing 26-10.  At the end of the third, the Chargers got their act together when Philip Rivers, under pressure, threw it high to Dontrelle Inman in the endzone and the score was 26-16 Carolina after a failed two-point conversion.

In the fourth quarter, it looked like the Panthers were going to score again, but a crucial pick six by Trovon Reed, the first-year player out of Auburn, avoided that.  Or so the Chargers thought.  The officials ruled that Reed was down at the goal line and the Chargers took over from there.  Mario Addison tackled Rivers in the endzone and the Panthers did end up scoring again, adding two points on the safety to make it 28-16.  Rivers threw another fourth quarter interception and that sealed the win for the Panthers, who now move to 5-8.  The Chargers also fall to 5-8.

This week, the Chargers come home to face the rival Oakland Raiders.  Kickoff is set for 1:25 p.m.

Tenny Palepoi has been suspended without pay for the team’s next four regular-season and/or postseason games for violating the NFL policy on performance enhancing substances. Palepoi’s suspension begins immediately.  Statement from the Chargers: "While disappointed to hear the news today about Tenny, we respect and support the League's decision. We are confident that he will learn from this and understand what is expected of him in the future."