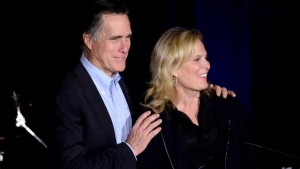 Story and photos by Chris Stone

January 17, 2015 (San Diego)--Mitt Romney on Friday gave the clearest hints so far that he is leaning toward another presidential bid, using the historic carrier Midway as a launching pad.

In his first public appearance in San Diego since announcing his interest in the 2016 race, the former Massachusetts governor said he’s been asked often in recent days about his wife’s feelings about a third run.

“She believes that people get better with experience,” the sometimes La Jolla resident joked. “Heaven knows I have experience running for president.”

However, Romney added that Ann, his wife of 45 years, “knows my heart in a way that few people do” and he said, “I love her and appreciate her support.”

Asked last fall about the possibility of a third campaign for the presidency, Ann Romney told the Los Angeles Times: “Done. Completely”

The most Romney said Friday about his plans were he is giving “serious consideration to the future.”

“These are the principles that I think should be the foundation of what we take to the American people: Make the world safer, provide the opportunity to all Americans regardless of what neighborhoods they live in, and lift people out of poverty,” Romney said.

“It was 50 years ago Lyndon Baines Johnson … declared the War on Poverty,” Romney said. “His heart was in the right place, but his policies didn’t work. We haven’t won that war.

“As a matter of fact, the rich are getting richer, income inequality is worse, and there are more people in poverty than ever before under this president.”

Republican conservative policies will “end the scourge of poverty in America,” he said.

“We need to give all residents in every neighborhood a chance to succeed,” the mayor said. “We have to help them rise up out of poverty.”

Faulconer added that this country’s measure of success should be how many people have an opportunity to move into a better job.

The mayor ended his speech by saying the challenge his party faces is to “make sure that we are doing that outreach. It’s not just about outreach. It’s about being inclusive.”

Texas Gov. Rick Perry, the second speaker of the day, was repeatedly applauded as he criticized President Barack Obama’s foreign and domestic decisions including Keystone Pipeline delays and immigration policy.

As for his own possible run for the presidency, Perry coyly stated, “I know that may surprise you, but I’ve been thinking a lot about 2016.”

Perry touted business growth in Texas, “Capital moves where it is welcome. By limiting the size and scope of the government, we have created unlimited opportunity.”

The RNC plans to return to San Diego next year for their annual winter meeting, it was announced.

Krvaric was pleased with the number of potential presidential candidates taking part, and added: “The campaign starts here.”