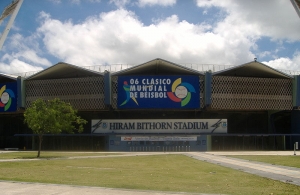 May 6, 2016 (Puerto Rico) - The Pittsburgh Pirates and the Miami Marlins were scheduled to play a two-game series in San Juan, Puerto Rico on May 30th and 31st.

Those two games will now be home games for the Marlins at Marlins Park in Miami, thanks to concerns by players on each team about Zika virus.

"Commissioner [Rob] Manfred and the MLBPA fully understand the disappointment by those in Puerto Rico to the relocation of the games," the league and players union announced. "MLB and the Players Association did everything possible to adequately address the concerns raised by players and still play the games in Puerto Rico, but despite extensive efforts, they were unable to develop a workable solution."

Although Zika has mainly been found in South America, a 70-year-old Puerto Rican man died in February, according to the Centers for Disease Control.  Puerto Rico was the first U.S. jurisdiction to report cases of Zika.

The games would have been a national broadcast on ESPN and the first two games played at Hiram Bithorn Stadium since 2010 when the Marlins played the New York Mets.