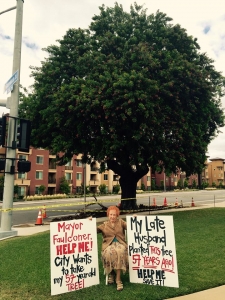 May 9, 2016 (Allied Gardens) – Marie Ostwald, 91, issued a Mother’s Day plea on Facebook asking San Diego Mayor Kevin Faulconer to stop city workers from cutting down a tree that her husband planted back in 1957.  She included a photo of herself beneath the tree’s expansive shade and invited other mothers to come sit with her today, Monday, to help save her beloved tree.

“As a mother, I nursed it and I helped it to grow from a seedling to sprout. As the years went by, our family grew and so did she,” Ostwald wrote. “All the neighborhood kids grew up playing within her shade. Today, she’s a San Diego landmark at the corner of Greenbrier and Mission Gorge. She’s a beautiful majestic living thing that has grown old alongside me. My husband died in 2005 but I still remember the day we planted the tree.”

The city was slated to remove the tree this week because it cracked the sidewalk.  City workers cut some roots and repaved the walkway, but indicated the roots could cause future damage and that the tree was no longer properly anchored, according to Ostwald’s post.

But the nonagenarian hired a private, certified arborist who Ostwald says found that “it’s possible the tree can stay for years to come. It’s all I have left of my late husband.” She asked that the tree remain as long as she is alive.

Her post has drawn over 1,600 shares so far. Upon learning of the plight of Mrs. Ostwald and her tree, City Council candidate Justin DeCesare called Mrs. Ostwald on Mother's Day to offer his support. He immediately posted a petition, gathering signatures which he indicated he would take to the city.

As mothers and babies began arriving this morning to show support, she received word that the city has granted her tree a temporary reprieve.  The city will have a second arborist review the tree’s stability to determine if there is any risk of it falling.

Mayor Faulconer sent this note: “Mrs. Ostwald, I want you to know that we heard you. Happy Mother’s Day.”