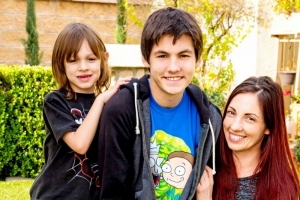 Photo:  Jayson Hinkle with his mother, Crystal and brother, Dominick

January 20, 2018 (Ramona) – Crystal Dominguez Hinkle has launched a GoFundMe page to help her son, Jayson, 14. “I am desperately trying to gather funds to move us back to Ramona, where my son can be surrounded by his loving and supportive friends,” she told ECM in an e-mail.

Jayson’s father, Bryan Hinkle, died of a self-inflicted gunshot wound in an apparent murder-suicide that also took the life of Samantha Banegas, 22, on January 3rd.

Crystal and Bryan Hinkle were divorced when the tragedy occured and she says her son is “devastated” by the loss of his father. She says she did not know Banegas and is baffled by why the tragedy occurred.

“No child should ever have to endure the emotional pain that it is to lose a parent and especially not under the tragic circumstances such as this. Anyone who knew my ex-husband also knew that he and our son had a powerful and loving bond and that he was an amazing father, which makes the incident even more difficult to understand,” Crystal wrote on the GoFundMe page.

She hopes to help her son grieve and heal, while maintaining a normal routine as much as possible. She wants Jayson to return to Ramona High School, where he is a freshman and has a large support group of close friends as well as extended family.

“Jayson receives communication from many friends throughout each day who can’t wait for him to return,” she says, adding that his school has also been very supportive.

Suddenly finding herself a single mother of two, including Jayson’s half-brother, Dominick, with additional expenses, she seeks help to cover moving expenses, first and last month’s rent and a cleaning deposit for an apartment, plus a couple of months rent as a financial cushion while she finds new employment.

She hopes to raise $8,000 in the next two to three weeks.  To read more or donate, visit GoFundMe.